Perhaps the most notable historic car in the collection is a 1933 PV654, Volvo’s first luxury sedan. On loan from the Volvo Museum in Gothenburg, Sweden, it is one of only 361 units ever built, and will be the first example to touch U.S. soil.

The Volvo PV653/654 models came to the Scandinavian market in August 1933 as the successor to the PV651/652, the first six cylinder cars from the young Swedish car company founded shortly before, in 1927.

The 654 customer also had more choices for body colors -- not only the standard Dark Blue available on the 653, but also Maroon red, Chestnut Brown and Light Sand. The 654 had a 3.2 litre straight six, side valve engine with 65 hp.

The PV4 was the first enclosed car made by Volvo. The fully restored example to be on display is one of just four that remain.

In 1955 the PV444 was the first Volvo model to be imported to the U.S. and marked the Swedish carmaker’s arrival in North America. It was also Volvo’s first unibody car, and for the American market was equipped with a 70hp four-cylinder engine. Even then, customers could opt for European Delivery.

The Volvo Sport, known internally as the P1900, was the company’s first sports car, a fiberglass bodied convertible coupe that inspired the company to build the legendary P1800.

Of the 67 Sports built about 50 are known to exist. Just 21 were sold in the U.S. Two are owned by Volvo Cars, including the white over red one that will be at Hilton Head.

The XC90 T8 Twin Engine is the future of Volvo. It’s the world’s first seven passenger plug-in hybrid SUV and with 400 horsepower can go 0-60 in about six seconds, yet get better mileage than most economy cars.

Occupants of the XC90 T8 are treated to a Scandinavian Sanctuary that includes a nine-inch tablet like control interface, a genuine crystal shift knob made by Swedish glassmaker Orrefors, and a suite of semi-autonomous drive systems that take the stress out of daily driving.

“These iconic cars illustrate Volvo’s strong design heritage and forward thinking,” said Lex Kerssemakers, President and CEO, Volvo Cars of North America. “With South Carolina the home for our first U.S. factory, the Hilton Head Island Concours is the perfect venue to share our history. We look forward to another 60 years delivering beautiful, safe, quality cars in the U.S. and around the world.” Kerssemakers will be in attendance at the Hilton Head Island Concourse and an honorary judge.

Attendees to the Hilton Head Island Concours are invited to test drive many of Volvo Cars’ newest models, including the all-new XC90 SUV and 2016 S60 Inscription sedan, which has the most rear legroom of any car in its class.

Media are welcome to view these historic cars and speak with Volvo executives at the Volvo Media Hospitality tent.

Keywords:
P1800, PV 4, PV 444, PV 653, 1927, 1933, 1946, 1961, Product News
Descriptions and facts in this press material relate to Volvo Cars' international car range. Described features might be optional. Vehicle specifications may vary from one country to another and may be altered without prior notification.
To view the full copyright information click here
Media Contacts
Related Images
Oct 05, 2015 ID: 167802 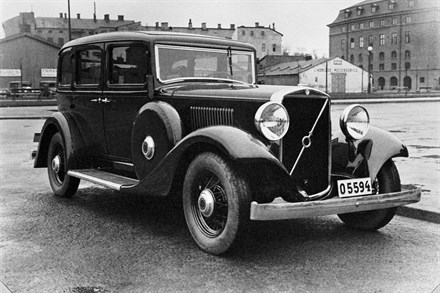