Volvo and the Red Sox Foundation hosted the raffle to raise money for children and families in need across New England. Brennan took home the C30 during Saturday's Red Sox versus Yankees game at Fenway Park.

Only 107 of the Special Edition C30s were produced with each car built to commemorate a Red Sox victory during the 2007 season. A numbered dash plaque in the Volvos indicates which of the 107 victories each car represents. Signifying the championship-clinching game, Red Sox Special Edition Volvo C30 number 107 was donated by Volvo to The Red Sox Foundation for the World Series charity raffle.

Finished in vibrant Passion Red, Red Sox Special Edition C30s proudly bears the team's logo on the front fenders while a larger transparent logo is affixed inside the rear glass hatch. The team logo is also featured on the floor mats. In addition, the C30s are authenticated by Major League Baseball through the Major League Baseball Authentication Program.

A Certificate of Authenticity couples the numbered dash plaque of each individual car to the corresponding 2007 season individual game victory, opponent and final score.

As the smallest and most expressive car in Volvo's model range, the C30 offers a dynamic driving experience. The turbocharged T5 5-cylinder engine produces 227-horsepower and 236 lb.-ft. of torque.  A five-speed Geartronic transmission is optional on the Boston Red Sox Special Edition C30.

About the Red Sox Foundation

The Red Sox Foundation is the official team charity of the Boston Red Sox. Their primary focus is in serving the health, education, recreation and social service needs of children and families in need across New England. Their goal is to harness the passion fans have for the Red Sox and transform it into a vehicle for positive change in the community.

*Price does not include destination charges of $745.

Keywords:
C30, Lifestyle, Special Interests, Mission, Design, Sponsoring, 2008
Descriptions and facts in this press material relate to Volvo Cars' international car range. Described features might be optional. Vehicle specifications may vary from one country to another and may be altered without prior notification.
Related Images
Jul 28, 2008 ID: 16542 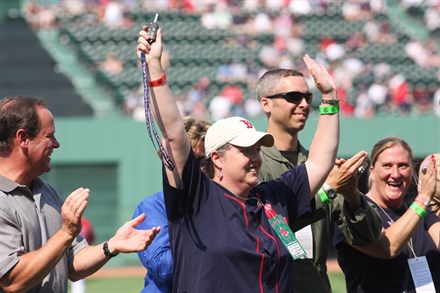