The all-new Volvo S40 gets a transverse five-cylinder in-line engine - a unique feature in the segment.

This has been made possible by new methods of shrinking the engine's outer dimensions. The result is a car that offers high performance and excellent driving dynamics. The engine's compact dimensions also contribute to the car's excellent crash safety.

The chassis has been developed in parallel with the new engines so as to provide driving properties on a par with those of Volvo's other sedan models.

The new gasoline engines are a further development of the low-friction engines that power the large Volvo models. The new generation is named RNC, with C indicating Compact. Most of the engine's external components have been designed and packaged so that the engine installation takes exceptionally little space:

The result is an engine that is 7.8 inches slimmer and 1 inch shorter than that found in the large Volvo models. This compact format makes the engine lighter. Combined with Volvo's architecture - transverse engine installation - it also contributes to enhanced crash safety since there is added space for deformation in the engine compartment.

What's also unique is that the all-new S40 went through a series of computer simulated frontal crash tests without the installed engine. The engines were then designed to fit within the empty space that remained after the simulated crash test. In a collision, the engine can be shunted up to 5.9 inches to the rear before the crankshaft comes into contact with the cross-member near the bulkhead.

There is up to 2.8 inches of free space above the engine between the cylinder head and hood. This allows the hood to crumple gently, thus reducing the risk of head injuries if the car should collide with a pedestrian or cyclist. This efficient packaging is part of Volvo's Intelligent Vehicle Architecture (VIVA).

The new five-cylinder in-line engines have a displacement of 2.4 and 2.5 liters. The five cylinders and large displacement provide high torque from low engine revs - along with swift acceleration.

What's more, a five-cylinder engine with a long stroke has a more relaxed character, owing to its low vibration level and smooth operation.

The engines in the all-new Volvo S40 share the same technology as the units that power the other Volvo cars within the lineup:

The all-new Volvo S40 T5 is the sportiest model in the range. It has a 2.5-liter gasoline engine mated to a light-pressure turbocharger. The turbo system is tuned to provide exceptional torque from low to high revs. The high and flat torque curve ensures excellent acceleration.

The all-new Volvo S40 T5 will later become available with All Wheel Drive. The AWD version will be launched in mid-2004. As with other Volvo models, the S40's electronically controlled system comes from Haldex.

Transmissions from the R models

The six-speed manual gearbox developed for the Volvo S60 R and V70 R finds a new home in the Volvo S40 T5. The six forward ratios are spread out to combine swift acceleration with high top speed. The gearbox has triple synchromesh and a reassuringly distinct change pattern with a precise gate.

The normally aspirated engine is mated to a new generation of Volvo's five-speed manual gearbox. It has been further developed with triple synchromesh for faster changes and distinct feel.

The automatic transmission found in the S60 and V70 is offered in the new Volvo S40. It is a five-speed unit with an adaptive gear-changing pattern to automatically adjust to the driver's driving style.

Much effort has been invested in matching the halfshafts and universal joints to the high engine power outputs, virtually eliminating torque steer under hard acceleration.

The all-new Volvo S40 has been developed in the same spirit as the Volvo S60 and Volvo S80. The experience gained from the advanced Volvo S60 R formed the basis for the new S40 sport sedan.

"A modern Volvo should obey the driver's slightest command - immediately and without fuss," emphasizes Peter Ewerstrand. "It should be as enjoyable to drive as it is safe. When it comes to the new Volvo S40, we had particularly high ambitions when the project got under way. And we're more than pleased with the result."

The five-cylinder powertrain laid the foundation for the premium-car properties. The chassis development was obtained from the P2-platform models (S60, V70 and S80). Independent suspension with a multi-link system at the rear provides a superb combination of comfort and responsiveness. The wider track and longer wheelbase, compared to the current Volvo S40 model, also contribute to the car's stable behavior on the road.

The front suspension geometry has been carefully calculated to provide quick and precise steering response, enhancing the sporty appeal.

The steering is electro-hydraulic, with light, distinct and controlled steering feedback.

"The new powertrain and the carefully matched chassis in combination with the body's exceptional torsional rigidity, make for a particularly sporty and inspiring driving experience. This is a car you'll truly look forward to driving whenever you get the chance," promises Peter Ewerstrand.

Keywords:
S40, Technology, Special Interests, 2004.5, 2005
Descriptions and facts in this press material relate to Volvo Cars' international car range. Described features might be optional. Vehicle specifications may vary from one country to another and may be altered without prior notification.
Related Releases 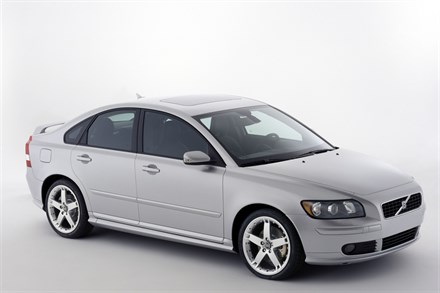