Volvo Cars has formally signed an agreement to locate its first American factory in South Carolina at an event attended by South Carolina Governor Nikki Haley and key public officials in Charleston. This paves the way for the fall 2015 ground-breaking of a full manufacturing facility capable of producing up to 100,000 cars per year. The first American built Volvos are expected to roll off the assembly line in late 2018.

“Today we formalize an important milestone in Volvo Cars’ global transformation in the United States,” says Lex Kerssemakers, President and CEO of Volvo Cars of North America, “our planned American factory demonstrates our commitment to the United States and our desire to be a truly global automaker.”

In addition to the signing, Volvo Cars announced plans to preserve 1,500 acres of wetlands with the State of South Carolina to support a “green belt” around the greater Charleston region. Volvo is also working with the local utility to power the factory with renewable energy and reroute storm water to form ponds that simulate wildlife habitats. Improvements to local roadway infrastructure will also ensure the factory has a minimal impact on the local environment.

Once completed, Volvo Cars will be able to manufacture vehicles on three continents, underscoring its position as a truly global car maker. It already operates two plants in Europe and two in China. The new US plant forms part of an ambitious medium term expansion plan to double global sales, boost market share and lift profitability.

Volvo Cars estimates that the factory will employ up to 2,000 people over the next decade and up to 4,000 people in the longer term. An economic impact analysis compiled by Dr. Frank Hefner at the College of Charleston estimates that, for an initial 2,000 direct jobs, more than 8,000 total jobs would be created as a result. The plant would contribute approximately $4.8 billion in total economic output on an annual basis.

Keywords:
Corporate News, Product News
Descriptions and facts in this press material relate to Volvo Cars' international car range. Described features might be optional. Vehicle specifications may vary from one country to another and may be altered without prior notification.
To view the full copyright information click here
Media Contacts
Related Images
Dec 11, 2014 ID: 155249 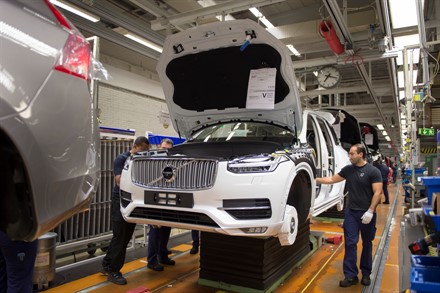