Culminating with a caravan of vintage vehicles crossing the Golden Gate Bridge, the event showcased five decades of Volvo wagon development. Volvo is a leader of European imports and has literally become an icon for the wagon segment.

"Volvo takes pride in being at the forefront of providing safe and logical innovations in our products," said Vic Doolan, president and CEO, Volvo Cars of North America. "And our rich history is never more apparent than seeing the developments through the years side by side by side."

The vintage fleet included two Volvo Duetts, the model that started it all back in 1953 and helped create the long-lasting image that Volvo wagons have established worldwide.

Other wagons from succeeding decades were driven by members of the press, with proud owners serving as navigators. "Here in San Francisco, the Volvo wagon is perhaps even more iconic than elsewhere. You see them everywhere and driven by every possible type of owner - from the Berkeley professor to the Marin soccer mom. The Volvo wagon is a preferred vehicle here and we had no trouble finding local owners to help celebrate the anniversary," added Lee Cordner, president of the Volvo Club of America Golden Gate Chapter.

The Golden Anniversary Rally began with a cruise through areas of San Francisco, reflecting on the architectural, social and cultural symbols of representative decades from the fifties to the present. Volvo first imported wagons into the United States in the fifties and since that time, Volvo wagons have been integral to supporting countless lifestyles and pursuits.

As the Golden Anniversary Rally made its return across the bay to the Presidio, Volvo owners and enthusiasts gathered for a breakfast and an impromptu "Show and Shine," celebration of their Volvos. "Some cars create a history for themselves that's more in tune with everyday life than racing or glamour. The Volvo wagon is one of these. All along the route people waved and greeted the vintage fleet - probably recalling a Volvo from their own past and feeling good about that memory," said Cordner.

The first Volvo wagon was built as a result of a surplus of chassis for it's then popular PV444. It was called the PV445 or Duett, meaning dual purpose (work and leisure). That was 1953. Since that time: the industry's first 'orthopedically-designed' seats appeared in the 1962 Volvo P122 or Amazon; the Pinifarina-influenced Volvo 145 debuted in 1967, beginning a movement throughout the industry towards one-piece tailgate design, offering a large rear window and increased cargo space; the Volvo 245, which premiered in 1974 and was produced for nineteen years, was selected by the United States Department of Transportation and the National Highway Transportation Safety Administration to help establish future U.S. vehicle safety standards; in the mid-1980s, Volvo was first to introduce turbo-charged wagons with its 700 series; in 1985, the Volvo 850 was the first car in the world to offer side impact airbags; the 1996 V70 set new standards for Volvo and the industry as a whole, with Prem-Air, a catalytic system that eradicates ozone at ground level; and, Volvo's most recent wagon, the V70 R, comes equipped with the most sophistical chassis on the market - the Four-C.

"The Volvo PV444 delivered safety conscious automotive comfort and performance, suited to the world...at that time. Today, the Volvo wagon line upholds that heritage of commitment to social, transportation and economic values...quicker and a bit more stylishly than in 1953," said Doolan.

For More Information and Photos:

Photo Caption: A fleet of Volvo cars, led by a 1956 Volvo Duett and other vintage Volvo wagons, crossed the Golden Gate Bridge today in celebration of Volvo's 50-years as a maker of wagons. The popular Swedish car manufacturer has established an enviable identity as the builder of long lasting, safe wagons. Over 100 local Volvo owners joined in the Golden Anniversary Rally.

Keywords:
Events/Activities, Special Interests
Descriptions and facts in this press material relate to Volvo Cars' international car range. Described features might be optional. Vehicle specifications may vary from one country to another and may be altered without prior notification.
Related Images
Sep 18, 2003 ID: 1627 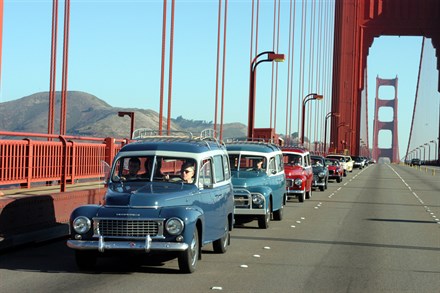