Volvo's 15 Millionth Car Comes with a Trip to Sweden

San Diego, CA, (May 2, 2008) - Paul and Aimee Kay bought a piece of Volvo history when they took delivery of their 2008 Volvo C70.  This special vehicle had traveled more than 5,000 miles from its factory birthplace in Uddevalla, Sweden to reach its new home.  For the brand, reaching this milestone has been the establishment of a heritage renown around the globe: safety leadership.

The first Volvo car left a Swedish factory in April, 1927. This new Swedish car was called the ÖV4 (" ÖV "- Swedish for "Open Car" and "4" denoting the number of cylinders).

In February, 2008 car number 15,000,000, ironically another convertible - with a retractable hardtop, was produced. With its safety legacy intact (cited for "Best Safety Innovation" for its inflatable side curtains [an industry first for convertibles] by the World Traffic Safety Symposium), the Volvo C70 also adds styling and good looks (anointed by Cars.com as "Play Car of the Year").

"Volvo Cars is proud of what the brand stands for," said VCNA's Regional Sales and Marketing Manager, Gregor Hembrough. "This milestone is symbolic of what we've been able to accomplish - like with the XC90, C30, and C70 - we've entered and re-defined new segments, and we're continually striving to exceed expectation of our customers."

The Kays took delivery of their Celestial Blue 'two-cars-in-one" Volvo at San Diego Volvo, where its dealer principal Wes Hinkle and Hembrough, were on hand to present not only the keys but an unexpected surprise from the glove compartment.

"We first saw the C70 at the Auto Show and fell in love with it," said Paul Kay.  "We went back and forth and finally we said the time is right."

Timing is everything. In addition to receiving their 15 millionth Volvo, customers Paul and Aimee Kay were also presented with a trip to Sweden, replicating Volvo's #1 European Overseas Delivery Program, without of course picking up their new car - which they now already have.

Their package for two includes:  Airfare; Hotels; and tour of the Factory Delivery Center, in the "Home of Volvo" Göteborg, Sweden.  However, to avoid any confusion before packing your bags, not every Volvo C70 comes with a special treat in the glove box.

If you're a tourist, a diplomat, or in the military, you can have your new Volvo delivered to any one of 13 European destinations, drive it during your stay there, and then have it delivered to your home in the U.S. after you return.

Keywords:
Special Interests, Awards
Descriptions and facts in this press material relate to Volvo Cars' international car range. Described features might be optional. Vehicle specifications may vary from one country to another and may be altered without prior notification.
Related Images
May 02, 2008 ID: 15267 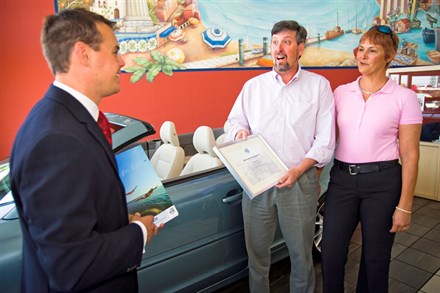 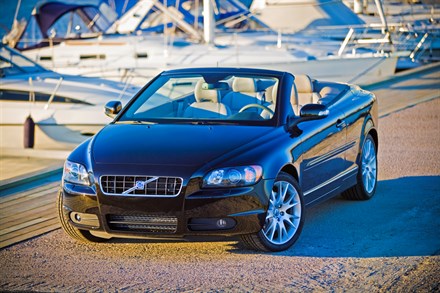