"At Volvo, Diversity is a big part of who we are and all that we do," said Thomas Andersson, Executive Vice President of Marketing for Volvo Cars North America."

"All consumers appreciate marketing efforts that speak to them personally and directly. These ads focus on Volvo quality, attractive styling and safety -- attributes of universal appeal."

The campaign, which recognizes that GLBT households are as diverse as the family of vehicles offered by Volvo, is intended to build a stronger connection between GLBT consumers and the Volvo brand.

With buying power estimated at $450 billion, the 14 million GLBT consumers represent one of the more significant customer blocks in the United States. The campaign is targeted nationwide, with a specific emphasis on the metropolitan areas of Atlanta and San Francisco.

Concurrent with the marketing initiatives, Volvo will also sponsor Human Rights Campaign (HRC) fund-raiser events in Atlanta and San Francisco (Black-Tie Dinners are scheduled for May 10 and July 26 respectively).

The Volvo campaign was coordinated with Ford Global Marketing. Diversity Inc. Magazine recently ranked the Ford Motor Company (FMC) as the number one company for its diversity initiatives. "This marketing program is another example of how FMC strives to be a leader in diversity marketing, which include gay, lesbian, and bisexual consumers," said Jan Valentic, Vice President of Global Marketing at Ford Motor Company."

The print ads were created by Prime Access Inc. of New York and will run primarily in national GLBT publications, beginning in May and continuing through August 2003.

In addition, Volvo will run a promotional on-line campaign concurrently.

Keywords:
Lifestyle, Special Interests
Descriptions and facts in this press material relate to Volvo Cars' international car range. Described features might be optional. Vehicle specifications may vary from one country to another and may be altered without prior notification.
Related Images
Sep 18, 2003 ID: 1487 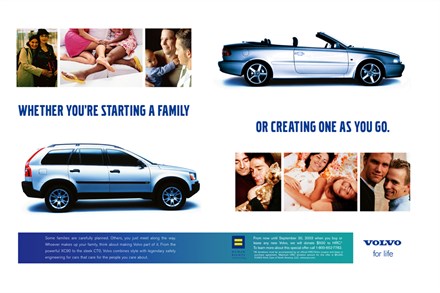