SAN DIEGO, Calif., January 2008 - This holiday season, more than 2,200 Costco members rushed to register with the Costco Auto Program for special savings on the elite Volvo XC90. The promotion ended 12/31/07, and while actual sales numbers haven't been finalized, more than 850 vehicle sales have been confirmed to date.

The promotion offered two distinct savings opportunities for XC90 sales made between November 26, 2007, and December 31, 2007. Costco members who elected to take delivery of their vehicle locally at a participating Volvo dealership received $1,000 off Volvo Employee Pricing and all applicable dealer cash incentives. Additionally, they received a $500 Costco Cash Card when they completed a member satisfaction survey about their buying experience.

Volvo's leading Overseas Delivery Option (OSD) was also showcased for members in the promotion. Members who elected to use OSD will travel with a companion to take delivery of their vehicles at the Volvo factory in Gothenburg, Sweden, before May 31, 2008. They'll also be flown to their choice of three cities: Paris, Rome or London - for a once-in-a-lifetime vacation package, compliments of the Costco Auto Program. These add-on trips were created expressly for Costco members and include accommodations and breakfasts during their stay. They will also receive a $500 Costco Cash Card upon completion of Costco's satisfaction survey.

With sales attributed to the promotion still being reported, one thing is certain: Volvo Cars of North America, Volvo dealerships, Costco members and the Costco Auto Program are all claiming this event as a winner. Automotive aficionados take note ... a success like this begs a repeat performance. The trips might be once-in-a-lifetime, but this promotion, or one like it, is certain to return to Costco auto buyers - compliments of the Costco Auto Program.

Volvo's XC90 is available in two versions: 3.2 and V8. Available with front- or all-wheel drive, the 3.2 is the entry-level model and carries a 3.2-liter inline six-cylinder engine rated for 235 horsepower. The XC90 V8 generates 311-hp from a 4.4-liter V8 and provides strong acceleration, reaching 60 mph in only 7.6 seconds. All-wheel drive is standard with the V8. The 3.2 comes with five-passenger seating (with the third-row seat optional), while the V8 comes with seven-passenger seating. The XC90 is a premium SUV, providing all major safety and convenience features on the base model, with the exception of optional rear parking sensors. Leather upholstery is standard on the V8 model, and optional on the 3.2. Premium manufacturer options include a rear entertainment system with dual screens, a DVD-based navigation system, a Dolby Pro Logic II surround-sound audio system and an interior air quality system.

Keywords:
XC90 (2002-2014), Special Interests, Mission, 2008
Descriptions and facts in this press material relate to Volvo Cars' international car range. Described features might be optional. Vehicle specifications may vary from one country to another and may be altered without prior notification.
Related Images
Jul 23, 2007 ID: 12076 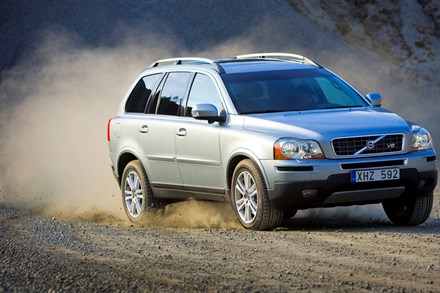 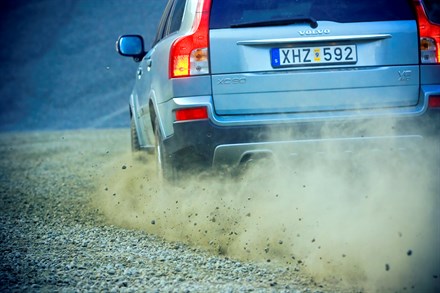