Chosen from thousands of new products and innovations, and selected as 1 of 100 best new technologies for 2007, Volvo Car Corporation, LLC, received Popular Science's annual Best of What's New award for this child protection system. This design was first shown in 2001 aboard Volvo's Safety Concept Car as a concept that would provide better seat belt positioning for children.  Subsequent refinements to the seat, vehicle side body structure, seat belt attributes, and inflatable side curtain culminated with launching Volvo's newest crossover wagon, XC70 in Geneva Motor Show in Switzerland this past March.

Earlier this year, Volvo Cars received an award from the World Traffic Safety Symposium at this year's New York International Auto Show. The award was for best new safety feature in an automobile.

Volvo's prides itself in finding innovative ways to advance automobile safety.  "Our goal is to help protect occupants. This award acknowledges our efforts to help protect our smallest passengers, our children," commented Thomas Broberg, Senior Safety Advisor, Volvo Car Corporation, Sweden.  "This new seat, in conjunction with our refinements in side body structure and the inflatable curtain will have a significant reduction in child injuries."

Seat belt positioning for children of different heights is important for better placement and protection. Several studies have shown that proper positioning with the use of a booster cushion helps reduce abdominal injuries caused by the child slipping under the seat belt. Field data in several studies supports these findings and emphasizes the importance of booster seats, and that the booster be designed to hold the belt firmly across the pelvis or thighs during a frontal impact. The overall effectiveness (Measured Abbreviated Injury Scale 2+) of booster seats is estimated as 31 percent as compared to using only a seat belt and as high as 75 percent as compared to no restraint at all. Getting all children of appropriate age and size to use booster cushion offers a potentially significant safety benefit.

A questionnaire-based study1 on 4 to 11 year old Australian children reported that one of the reasons for moving the child from a booster to the adult seat belt only (69 percent) was primarily that the child was too big for the booster. Another major reason was the child disliked sitting in a booster and would be more comfortable using only the seat belt and, not surprisingly, the child thought they were too 'grown-up' for a booster cushion.  The study concluded that the design of booster cushions should have the capacity to seat larger children as well as being more appealing to children. By offering the integrated  two-stage booster cushions, Volvo believes the level of acceptance will increase among this age group.

This new child safety feature will be available this fall in the all-new 2008 XC70 crossover wagon, followed in February 2008 in the all-new 2008 V70. Priced at $495 (manufacture's suggested retail price) this option includes two rear-seat mounted integrated booster seats and two pyrotechnically pretensioned seat belts with new load limiters to accommodate children using this booster cushion and normally positioned adults.  Both seats fold flat to expand the cargo compartment and are indistinguishable from rear seats without this option.

Volvo Cars of North America, LLC (VCNA), based in Irvine, Calif., is a subsidiary of the Volvo Car Corporation of Göteborg, Sweden. VCNA provides marketing, sales, parts, service, technology and training support to Volvo automobile retailers in the United States, and oversees Volvo operations in Canada, Mexico and Puerto Rico.  Volvo has been building cars with safety in mind for 80 years. For more information: http://www.volvocars-pr.com/

Keywords:
Safety, Awards
Descriptions and facts in this press material relate to Volvo Cars' international car range. Described features might be optional. Vehicle specifications may vary from one country to another and may be altered without prior notification.
Related Images
Feb 01, 2007 ID: 4803 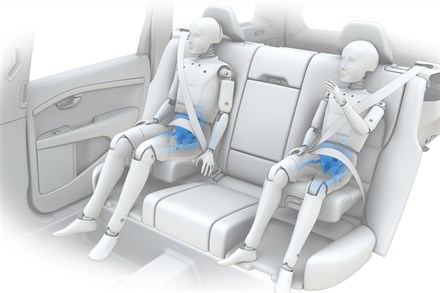 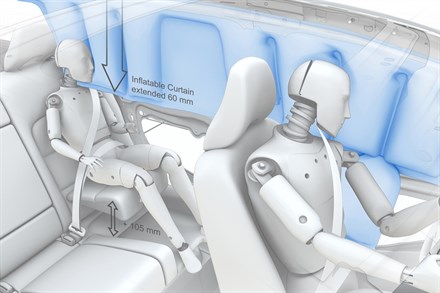