The Humanitarian Award presented by Volvo was created to recognize and celebrate a prominent individual in the film and television arts community who has committed their self and career to positively improving and/or changing the community.  "BAFTA/LA has a history of recognizing individuals for their talents in the arts, but part of what defines them is also how they give back to the community.  Richard is a prime example of how art and philanthropy go hand in hand, and we are honored that he will be the first recipient," states BAFTA/LA Chairman of the Board Peter Morris.

"I have always believed that it is the responsibility of the film and television community to share their talents and time with those less fortunate.  I am hoping that this award will bring more attention to charities and organizations which facilitate giving back to the global community," says Curtis.

"Undoubtedly, Richard Curtis owns a Volvo -- or he should!" says Anne Bélec, president and CEO of Volvo Cars of North America.  "When you compare how he's devoted his talent and resources to help others, well, it's so consistent with Volvo's commitment to people in the areas of safety innovation, environmental care and quality of life.  His unselfish work typifies the true heroes we see each year in the Volvo for life Awards program."

Although Curtis is most acclaimed and recognized for his screenwriting accomplishments, he is passionate about philanthropy. His dedication to philanthropy became visible in 1985 when he founded Comic Relief, which has raised over ₤67,250,000 to date.  The organization was established on the basis of helping others, and most importantly, using laughter and comedy to raise funds and ultimately change lives.  Over the past two decades, more than two thousand celebrities have lent their talent and time to Comic Relief such as Johnny Deep, Woody Allen and Robbie Williams.  Curtis is also the founder of Make Poverty History, which was a British and Irish coalition of trade unions, religious and campaigning groups, charities and celebrities who gathered to increase awareness about relieving poverty in 2005.  He has also helped organize the Live 8 concert to publicize poverty against Africa, as well as Idol Gives Back, a TV extravaganza which has raised over $75 million to help children and young people in extreme poverty in the U.S. and Africa.

New Zealand-born screenwriter Richard Curtis began his career at the 1979 Edinburgh Festival in Scotland where he received an offer for the BBC-2 series "Not the Nine O'Clock News."  Since then, Curtis has collaborated with some of Britain's and America's biggest name actors and comedians, such as Hugh Grant, Julia Roberts, Colin Firth, Emma Thompson, Keira Knightley, Andie MacDowell and longtime colleague and fellow Oxford alum Rowan Atkinson.  In America, Curtis is most acknowledged for his popular British romantic comedies The Tall Guy, Four Weddings and A Funeral and Notting Hill.   In 1995 Curtis earned BAFTA and Oscar screenwriting nominations for Four Weddings and a Funeral.  More recently, Curtis won an Emmy Award for Outstanding Made for Television Movie and Outstanding Writing for a Miniseries, Movie or a Dramatic Special for The Girl in the Café in 2006. Over the span of his career he has been nominated for the BAFTA Film Award for Best Screenplay - Adapted for Bridget Jones's Diary, the Alexander Korda Award for Best British Film for Love Actually and in May 2007 Curtis was awarded the Fellowship award at the BAFTA Television awards. The Fellowship award was in recognition of his charity contributions and successful career in film.

Serving as the bridge between the American and British entertainment communities, BAFTA/LA is a professional non-profit organization founded in California in 1987 to promote and advance original work in film, television and interactive media.

BAFTA/LA's outreach programs benefit members and other professionals working within the entertainment industry, as well as the Los Angeles community at large. BAFTA/LA provides exclusive access to screenings, Q&A's with talent and filmmakers, conversations with leading UK-based film and television executives, and the Heritage Archive, featuring broadcast-quality interviews with distinguished British members of the film and television industries. Educational outreach for students and the Los Angeles community includes an after-school screening program for inner-city youth at the Helen Keller Park Recreation Center and a recent partnership with FilmAid to mentor young filmmakers. Additional programs include seminars in association with local universities and festivals, scholarships for post-graduate programs, and recognizing professional and student talent with awards at film festivals throughout the U.S.

Keywords:
Awards
Descriptions and facts in this press material relate to Volvo Cars' international car range. Described features might be optional. Vehicle specifications may vary from one country to another and may be altered without prior notification.
Related Images
Nov 02, 2007 ID: 12913 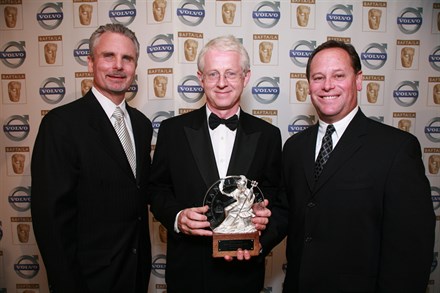