Irvine, CA. - February 12, 2003 - Force = Mass x Acceleration. While that maybe an oversimplification, the fact is the laws of physics are unyielding. Imagine this: A 60 pound unbelted child in the back seat of a car traveling at a mere 30 miles per hour is involved in a sudden collision can weigh as much as a young elephant - about 2,700 pounds. That means the child can, during a frontal accident, impact the windshield or the front seat occupant - with deadly force. Not a pretty physics lesson.

True: It's a human tragedy that is easy to prevent - CLICK!

Accidents will happen, but they don't have to become tragedies. According to the National Highway Traffic Safety Administration, an estimated 4,193 children's lives were saved from 1975 to 1998 by the use of safety belts and child restraints.

"Restraints help people and cars move together. Imagine trying to keep your balance in a standing room only train car as it lurches forward suddenly or stops abruptly without something to brace yourself with" comments Christer Gustafsson, Senior Safety Engineer for Volvo Cars, Sweden.

"People are just full of reasons for not belting back seat passengers" states Christer. "School's just 3 minutes away, we're just going to the grocery store, or just over to friend's house." We're full of excuses. But in the end, if we don't belt our children or for that matter any rear seat occupant, we're setting them up for injuries or death. 'Sorry' doesn't go very far then."

"Unless one studies physics, the numbers seem unreal. But they are very real" according to Christer. "In the rapid deceleration that occurs at the moment of impact, a child's "crash weight" increases dramatically. For instance, at 30 miles per hour, an unbelted 60-pound child will be hurled forward with a force that multiplies the impact approximately 45 times above normal; depending on the object collided with. At 42 miles per hour, those numbers rise to 75 to 150 times normal. So, in effect, the crash weight of a 60-pound child at 42 miles per hour can range from 4,500 to 9,000 pounds. That's an astounding 2 - 4 tons, or about the weight of an elephant. A crushing force indeed."

A car's seat belt keeps doing its job of helping to retain the occupant within the safety structure of the cabin after the initial impact has occurred. Accidents might involve secondary impacts and rollovers. It is the seat belts that help keep the rear seated occupants strapped safely inside the vehicle until the energy of the accident has dissipated. "During a roll-over the effect is very much like clothes in a washing machine during the spin cycle. There are huge forces that can easily eject occupants who are not using a seat belt." states Christer.

Small children who have outgrown their toddler seat should use a booster cushion to help properly position the three-point seat belt. Volvo offers the integrated child booster cushion for children 40-80 pounds who need to be comfortable and properly restrained. There are two styles: one that can be moved from car to car, the other is built into the seat cushion. The car's rear seat bottom opens up, its lower half then forming a booster seat cushion. This cushion is high enough to correctly position the lap portion of the seat belt low across the child's hips, together with the vehicle's adjustable center head restraint forms a comfortable and safe seat for the child.

"I'm often asked, 'What's the most important safety feature in your Volvo's?' states Christer. "With great fun, I say, 'The driver'. After all, the driver makes the decision to properly use safety devices we engineer into our cars. Using seat belts is so easy, if more people understand the law of physics, people would see the importance of using seat belts - in both front and rear seats. Parents should set the example by using their seat belts and insisting the rear seat passengers do the same. Offer your beloved children the same safety you do when you buckle-up. Having everyone belted is a great gift of life and love"

So do your part for car safety. Help protect that most precious cargo of all - buckle them up. No one wants an elephant in the back seat.

Keywords:
Safety, Interior, Events/Activities
Descriptions and facts in this press material relate to Volvo Cars' international car range. Described features might be optional. Vehicle specifications may vary from one country to another and may be altered without prior notification.
Related Images
Sep 18, 2003 ID: 361 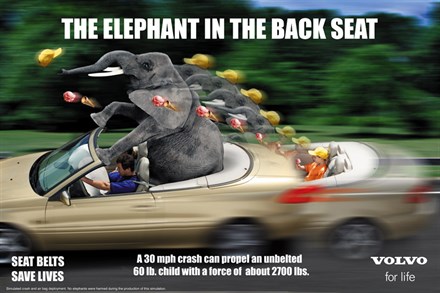