Volvo Cars continues to address the problem of rear-end collisions by introducing Collision Warning with Auto Brake - a refined warning system that makes the car brake by itself if the driver doesn't act when a rear-end collision with a moving or stationary vehicle is imminent.

"This can mean the difference between a serious injury and minor consequences for the occupants of both vehicles," says Ingrid Skogsmo, Director of the Volvo Cars Safety Centre.

Rear impacts represent a third of all reported accidents - and in more than 50 percent of these accidents, the driver doesn't brake at all.

The new Collision Warning with Auto Brake (CWAB) initially warns the driver and pre-charges the brakes. The brakes are automatically activated if the driver doesn't act when a rear-end collision with a moving or stationary vehicle is imminent.

While the original system, introduced in the Volvo S80, is radar-based, Collision Warning with Auto Brake uses both radar and a camera to detect vehicles in front of the car. The long-range radar reaches 150 metres in front of the car while the camera range is 55 metres.

By using Data Fusion to combine information from the radar and the camera, the system becomes more efficient.

"Since the system combines information both from the radar sensor and the camera, it gives such a high confidence level that automatic braking is possible if a collision is imminent. The system is programmed to activate autonomous braking only if both sensors agree that the situation is critical," says Jonas Tisell, technical project manager for Collision Warning with Auto Brake at Volvo Cars.

One of the main advantages of the camera is the possibility of detecting stationary vehicles and warning the driver while maintaining a low false-alarm level.

"Statistics show that 50 percent of all rear-end collisions involve a stationary object, which means that Collision Warning with Auto Brake covers twice as many situations as with the present system," says Jonas Tisell.

To adapt the warning system to different conditions and individual driving styles, its sensitivity can be regulated in the car settings menu. There are three alternative sensitivity positions.

Begins with a warning - and pre-charging of the brakes

If the car approaches another vehicle from behind and the driver does not react, a red warning light flashes in the head-up display on the windscreen. At the same time, an audible signal can be heard. This helps the driver react and an accident can be avoided in most cases.

"The head-up display gives a clear and very efficient warning. The red light appearing on the windscreen in front of the driver produces the same gut-reaction effect as when you see a brake light in front of you", says Jonas Tisell.

If the risk of a collision increases despite the warning, the brake support is activated. To shorten the reaction time the brakes are prepared by the brake pads being placed against the discs. The brake pressure is also reinforced hydraulically, ensuring effective braking even if the driver does not press the brake pedal particularly hard.

If the driver doesn't brake and the sensor system determines that a collision is imminent, the brakes are activated.

Auto Brake is designed to lower the impact speed as much as possible and thereby reduce the risk of injury to the occupants of both vehicles.

"A reduction in collision speed from 60 km/h to 50 km/h, for example, gives approximately 30 percent less impact energy. This can mean the difference between a serious injury and minor consequences for the occupants. Depending on the circumstances, it is also possible that the Auto Brake can help avoid the impact entirely," says Jonas Tisell.

To make driving more comfortable, Volvo Cars has developed Adaptive Cruise Control, ACC. It helps the driver by maintaining the distance to the car in front and the system contributes to relaxed driving control when the traffic flow is uneven.

Adaptive Cruise Control uses a radar sensor to continuously measure the distance to the vehicles in front and the system automatically adapts the speed of the car to ensure that the distance is maintained.

The driver activates the cruise control, sets the desired maximum speed between 30 and 200 km/h and chooses a time interval to the car in front. There is a choice of five different time intervals between 1 and 2.6 seconds.

When the radar sensor detects a slower vehicle in front of the car, the speed is automatically adapted to that vehicle even when it changes speed.

"Since Adaptive Cruise Control handles part of the routine driving operations the driver can focus further ahead and drive with greater safety margins," says Jonas Tisell.

Distance Alert is another new comfort feature that helps the driver keep a proper distance to the vehicle in front even when the Adaptive Cruise Control is disengaged.

If Distance Alert is engaged and ACC is activated, the DA system becomes temporarily disengaged.

Both ACC and Distance Alert are tailored to help the driver comfortably follow certain national regulations defining the required distance to the vehicle in front.

Some of the described systems' availability depends on the number and quality of visible road markings. The lane markings must be clearly visible for the camera Poor light, fog, snow and extreme weather conditions can make the system unavailable.

Keywords:
Safety, Technology, 2008, XC70 (2008-2016), S80 (2008-2016)
Descriptions and facts in this press material relate to Volvo Cars' international car range. Described features might be optional. Vehicle specifications may vary from one country to another and may be altered without prior notification.
Related Images
Aug 28, 2007 ID: 12147 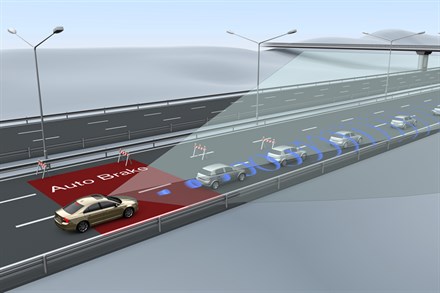 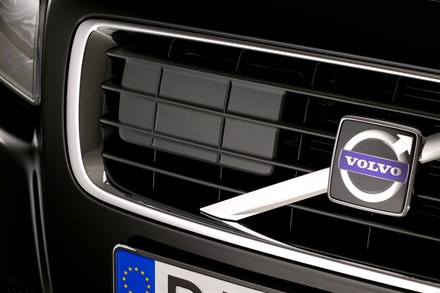 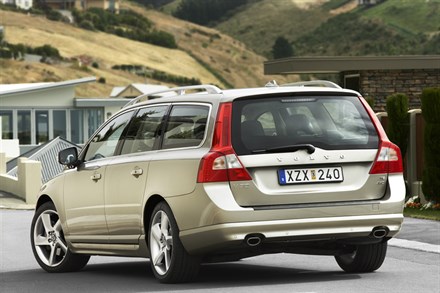