Volvo Cars and the Environment 2007

Dating from the early 1970s, Volvo Cars' commitment to the environment covers the entire lifecycle of the car, from design, engineering and production to useful life, service and recycling. Efficient energy and resource utilisation and reduced emissions are important elements of this commitment, as is a healthy in-car environment.

One of the greatest challenges facing the car industry is to reduce fuel consumption and, as a result, emissions of greenhouse carbon dioxide, which contribute to climate change. In this area, some of our most important contributions are:

* The all new Volvo V70 will also be available in a FlexiFuel version later in 2007.

At present, fossil fuels such as petrol and diesel oil account for about 98% of total automotive fuel consumption. A wide range of alternative fuels and technologies is required  to replace these.

Since 1995, we have been offering methane-powered Bi-Fuel cars delivering fossil carbon dioxide emissions that are about 25% lower on natural gas than on petrol. However, due to insufficient sales, we decided in autumn 2006 to concentrate instead on bioethanol, diesel engines with particulate filters and other options, such as hybrid technology.

In Sweden in 2005, we launched bioethanol-powered Volvo FlexiFuel cars delivering significantly lower emissions of fossil carbon dioxide in service. The Volvo S40, V50 and C30 can be powered by bioethanol E85 and have been available in FlexiFuel versions in many European markets (nine in 2006). The all-new Volvo V70 will also be available in a FlexiFuel version later in 2007.

Cutting fuel consumption is the biggest challenge facing the car industry and electric hybrid technology may offer an improvement in fuel economy of about 30%. Our new hybrid development centre in Göteborg represents a major step on the road to sustainable mobility.

Our Swedish market company is competing in the 2007 Swedish Touring Car Championship (STCC) with an E85 bioethanol-powered Volvo S60.

Volvo Cars is investing SEK 10 billion in environmental research and development over a five-year period with the aim of reducing the fuel consumption and environmental emissions of Volvo cars.

Towards cleaner air
Volvo Cars launched the three-way catalytic converter and oxygen sensor (Lambdasond®) 30 years ago, enabling noxious emissions to be cut by 90%. Today, the exhaust emission control systems used in our petrol engines eliminate between 95 and 99% of the carbon monoxide, nitrogen oxides and hydrocarbons in the exhaust gases, while our diesel engines are equipped with a particulate filter that traps approximately 95% of the soot particles. Volvo engines comply with strict exhaust emission requirements and several units, including the V8 and our new six-cylinder engine, also meet exhaust emission limits equivalent to the particularly stringent Californian ULEV II standard. In the ‘green' states and contiguous states in the USA, we also offer an engine complying with the PZEV (Partial Zero Emission Vehicle) emission control standard - one of the toughest in the world.

Offering a healthy in-car environment is a high priority for Volvo Cars. All of our upholstery materials and interior textiles are tested for certain harmful or allergenic substances and emissions, and meet the requirements of Oeko-Tex Standard 100. Volvo Cars' advanced Interior Air Quality System (IAQS) reduces the levels of certain harmful gases and particulates. In addition, several of the interior metal components are tested for contact allergies, and actually meet the EU requirements for nickel leakage from jewellery. With the launch of the new Volvo S80 in 2006, we also introduced our Clean Zone Interior Package (CZIP), a feature developed specifically for allergy-sufferers, and providing a cabin air  environment recommended by the Swedish Asthma and Allergy Association. Swedish Asthma & Allergy Association also recommend the Interior Air Quality System and the Automatic Ventilation.

A study by the US environmental institute, Ecology Center, shows that the cabins in Volvo cars (model years 2000-2005) offer very high air quality compared with many other makes. This includes the lowest levels of phthalate softeners and the second lowest levels of the flame retardant, PBDE.

Over the last forty years, Volvo Cars has reduced the environmental impact of car manufacturing to a significant extent. An example is the emission of solvents - an area of priority in the automotive industry as a whole. At present, new Volvo cars are designed to be 85%* recyclable. Volvo was the first carmaker to supply Environmental Product Information (EPI) to help the consumer to choose a Volvo model on the basis of its life-cycle environmental performance.

We are involved in a number of environmental projects in partnership with AB Volvo. These range from the Volvo Environment Prize to Volvo Adventure, an environmental competition for young people around the world conducted in collaboration with UNEP (United Nations Environment Programme).

1972     UN Global conference on the environment in Stockholm: Volvo raises the critical role of the car in society

1996     Dialogue on the Environment provides environmental training for all employees

1996     Introduction of environmental standards for suppliers

Keywords:
Environment
Descriptions and facts in this press material relate to Volvo Cars' international car range. Described features might be optional. Vehicle specifications may vary from one country to another and may be altered without prior notification.
Related Images
May 03, 2007 ID: 11491 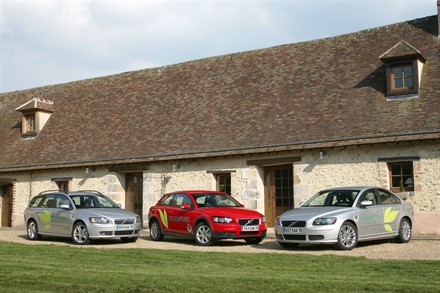