The study, conducted by IIHS using data from rear-impact injury insurance claims submitted from three major insurance companies, discovered that "the key to reducing injury risk in rear-end crashes is to keep the head and torso moving together." IIHS stated that Volvo's Whiplash Protection System design reduced head and neck injuries by limiting forward acceleration of the torso in relation to the head in a rear-end collision.

A first of its kind, the study compared vehicles of different model years that had redesigned seats and head restraints but had not been significantly changed in any other way. Comparing Volvo S70 sedans without the Whiplash Protection System to those equipped with WHIPS resulted in a 49 percent reduction in neck injury claim rates, the study found. "Volvo has worked closely with IIHS in the past regarding our WHIPS seats and we are extremely pleased by the results of this most recent study," commented William Shapiro, Volvo Cars of North America regulatory and compliance manager.

The WHIPS seat provides improved spinal support by virtue of its modified backrest characteristics and close proximity of the head restraint's position to the occupant's head. WHIPS utilizes a specially designed hinge mount that attaches the back rest to the seat bottom, which has a pre-determined rate of rearward movement in the event of certain types of rear impacts. The seatback also has a series of springs that allows the cushion to move slightly rearward upon impact, thereby cradling the body within the seat. This, combined with high-mounted head restraints, help to limit the "whipping" motion of the head that often occurs during a rear-end impact. Internal testing by Volvo found that the occupant's neck acceleration was reduced by approximately 50 percent and forward rebound is reduced by the WHIPS function of the recliner mechanism.

Long recognized for its leading role in the study of automotive safety and occupant protection, Volvo introduced WHIPS on the S80 luxury sedan in 1999 and now offers the safety system as standard equipment on all of its vehicles. WHIPS is just one of numerous safety firsts introduced by Volvo. Others include the first use of front-seat three-point seatbelts as standard equipment in 1959, the world's first use of side impact airbags (called SIPS), and Roll Stability Control (RSC), the first-ever use of technology that helps prevent a roll-over in an SUV, the all-new 2003 Volvo XC90.

Keywords:
Safety, Interior, Technology, Special Interests
Descriptions and facts in this press material relate to Volvo Cars' international car range. Described features might be optional. Vehicle specifications may vary from one country to another and may be altered without prior notification.
Related Images
Sep 18, 2003 ID: 105 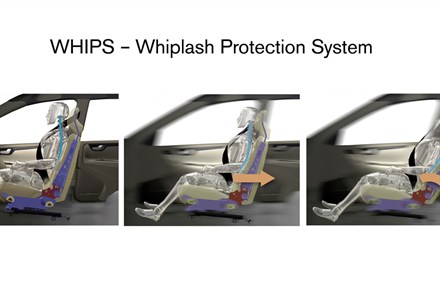