NEW YORK CITY (April 5, 2007) - In 1998, Rose Mapendo was sitting on the concrete floor of a Congolese prison cell summoning up every ounce of courage, strength and intellect to protect her children. Almost ten years later, she has used that same determination and drive to help protect and rescue countless thousands of fellow refugees of genocide, and tonight was honored for her humanitarian outreach at the 5th Annual Volvo for life Awards ceremony in the heart of New York City. Volvo named Mapendo "America's Greatest Hometown Hero" and awarded her a $50,000 charitable contribution and a new Volvo every three years for the rest of her life.

Mapendo, a Tutsi, was imprisoned and tortured by Congolese soldiers in the wake of the Rwandan genocide. Following 16 months of daily confrontations with death, witnessing the torture and execution of her husband and giving birth to premature twins on the floor of her cell, Mapendo and her nine children ended up in a refugee camp in Cameroon, from where she resettled to Phoenix, Ariz. Once safely established in the U.S., Mapendo helped found Mapendo International with the man responsible for her rescue. Mapendo International works with the U.S. Department of State and the United Nations to identify and assist Africa's forgotten, those who are at risk of falling through the cracks of humanitarian aid efforts. The organization helps these people through its medical clinic in Kenya and through a rescue operations initiative, identifying at-risk individuals, families and groups of refugees and working to get them out of danger.

Held at the world famous 42nd St. Cipriani on April 5, the Volvo for life Awards ceremony was the climax of the largest-ever national search for and celebration of everyday heroes, with Volvo Cars of North America providing $1 million annually in awards and contributions. This year, in honor of the Awards' 5th Anniversary, Volvo selected the top five heroes from every state in America and asked the public to visit www.volvoforlifeawards.com and vote for their favorite unsung hometown hero. Volvo received hundreds of thousands of votes from across the country.

"The heroes selected as this year's honorees have incredibly moving and powerful stories that symbolize Volvo's core values of conscience, care and character and we are exceedingly proud to have the chance to honor them," said Anne Bélec, president and chief executive officer for Volvo Cars of North America. "It's hard for anyone to imagine living through what Rose and her family had to endure, but to then go on to help other victims like herself is truly inspirational. She gives Africa's forgotten refugees a voice and we hope this recent recognition will help America listen."

When Mapendo and her children were captured, one of her daughters, Nangabire, was away from home and avoided imprisonment. In 2000, when U.S. rescue workers spotted Mapendo and her malnourished twin baby boys, they were able to relocate the Mapendo family to Arizona but Nangabire, lost and presumed dead, was left behind. It wasn't until 2002 that Mapendo discovered that her daughter was alive and safe with Mapendo's parents, and then a further five years before mother and daughter were reunited briefly when Mapendo visited Africa this January. Finally, after years of determination and mountains of paperwork, Nangabire, now 17, was reunited with her mother in New York, April 4th - the day before the ceremony - and will go home to join her nine brothers and sisters in Arizona this Friday.

Mapendo currently serves as the Mapendo Organization's spokesperson while working full time at a local hospice and, as a single mother, raises her children, all of whom attend school and college.Mapendo was nominated for the Volvo for life Awards by actress Susan Sarandon, an advisory board member of Mapendo International.

About the Volvo for life Awards Ceremony

Hosted by Benjamin Bratt, the Volvo for life Awards ceremony was attended by more than 600 media, entertainment and other executives at 42nd St. Cipriani in New York and featured music performances by Swedish sensation The Soundtrack of Our Lives, the Tommy Castro Band and Kaissa. During the ceremony, Volvo also named 15-year-old Samita Mohanasundaram of Nashua, N.H., the winner of the Alexandra Scott Butterfly Award and presented her with $25,000 for a charity of her choice. In addition, Volvo presented a Volvo for life Friendship Award and $25,000 to Brian von Eiff & Brad Worrell for their friendship and their contribution to Best Buddies.

Volvo for life Awards judges Aaron, Bradley and Ride recognized Rose Mapendo and the other category winners for safety and environment, who also each received a $50,000 charitable contribution:

For the majority of her married life, Lucas was a scared mother living overseas trying to protect herself and her children from her abusive husband. With no resources available or people she could confide in to help bring her family to safety, Lucas didn't know where to turn. When Lucas and her children returned back home to the United States after fleeing the Middle East, she discovered she was still on her own. No government official to help her repatriate, no one to help her fight for her custodial rights, no one to give official advice or provide financial and emotional support. So, in 1999, Lucas, 48, took matters into her own hands and founded the American Domestic Violence Crisis Line.

Today, the crisis line acts as a lifeline for victims of domestic violence, especially those living overseas. In 2006 alone the program received 1,281 crisis calls and emails and helped 258 families in 47 countries. It also offers additional services, including anti-domestic violence advocacy, intervention, case management, safety planning, information, referrals, danger to safety transportation back to the United States, payment of legal retainers and transitional housing.

Kahn was named a finalist in the Volvo for life Awards in honor of his work as creator of an ink jet and laser printer cartridge recycling program that has raised more than $30,000 for pediatric oncology research.

What began as Kahn's goal to raise $1,800 for pediatric oncology research evolved into Cartridges for a Cure, a large-scale fundraising program that asks businesses, non-profits, individuals and educational organizations to recycle used ink jet and laser printer cartridges. Participants in Cartridges for a Cure visit Kahn's Web site, www.cartridgesforacure.com, fill out an electronic form and ship cartridges directly to the recycling company. Kahn receives a check each month for recyclable cartridges donated. All proceeds support pediatric oncology research at Johns Hopkins, where Kahn underwent treatment for acute lymphocytic leukemia. Although Kahn has been in remission since age six, his desire to help others fight cancer continues to thrive along side Cartridges for a Cure.

Kendall Phills of Charlotte, N.C. lost her former NBA star husband in a nationally publicized street racing accident in 2000. Phills is now a powerful advocate for safe driving and with her initiative, "Be Safe-Drive Smart," she takes her husband's wrecked car on tour to educate North Carolina teens about dangerous driving habits.

Rosamond Carr, of South Orange, N.J., opened an orphanage to care for young victims of Rwandan genocide. The Imbabazi Orphanage is currently home to 124 children. Carr passed away September 29, 2006, but her legacy lives on in the hundreds of children she rescued at the orphanage.

Rev. Faith Fowler of Detroit, Mich., runs a variety of programs that benefit the local homeless, mentally ill and mentally impaired populations in her inner-city neighborhood.

Laura Moore of Lilburn, Ga., founded the Dream House, a transitional foster home to provide loving care for medically fragile children, while recruiting and training foster parents to take care of them.

Volvo named 15-year-old Samita Mohanasundaram of Nashua, N.H., the winner of the Alexandra Scott Butterfly Award. The award was created by Volvo Cars of North America to honor young heroes who do the extraordinary in the areas of Safety, Quality of Life and Environment in the name of Alexandra Scott, a Volvo for life Awards winner from Wynnewood, Pa., who passed away at age eight from cancer. She raised more than $1 million for pediatric cancer research through lemonade sales and other fundraising activities. Parents Jay and Elizabeth Scott continue promoting Alex's cause and raising money for pediatric cancer research through their foundation, Alex's Lemonade Stand.

More than half of Mohanasundaram's lifetime has been dedicated to helping others. Her volunteering efforts range from collecting and donating thousands of books to impoverished children in India to organizing a card-signing drive for Florida's hurricane-affected residents. Mohanasundaram was recognized by the Scotts at the ceremony and received a $25,000 contribution to the charity of her choice.

For more information on the Volvo for life Awards and to view this year's nominees' and finalists' stories, visit www.volvoforlifeawards.com.

Media:            For photos and more information on the Volvo for life Awards: www.volvocars-pr.com

Keywords:
Events/Activities, Special Interests
Descriptions and facts in this press material relate to Volvo Cars' international car range. Described features might be optional. Vehicle specifications may vary from one country to another and may be altered without prior notification.
Related Images
Apr 06, 2007 ID: 11371 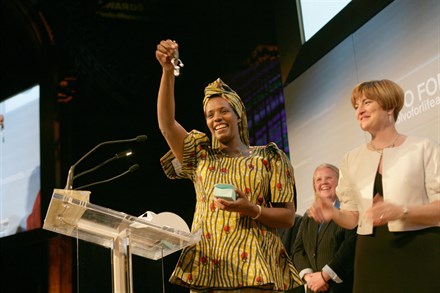