Irvine, CA (October 4, 2002) - Volvo Cars of North America, LLC (VCNA), in conjunction with Best Buddies, will offer the first new XC90 sport-utility vehicle available to consumers up for auction during the 14th annual gala Best Buddies Ball on Saturday, October 12, 2002. As a highlight of the evening, the live auction will also be open to a nationwide audience of potential bidders through eBay's live auction format, which will subsequently be heavily promoted through America Online.

With its stunning good looks and no fewer than five automotive world's firsts - including the first ever SUV with Roll Stability Control and inflatable side window curtains for all three rows of seats - the 2003 Volvo XC90 truly marks the introduction of the next generation of sport-utility vehicle. The gleaming Black Sapphire XC90 AWD T6 donated by Volvo Cars of North America for the Best Buddies Ball is the top-of-line vehicle within the XC90's model line. Packed with luxurious versatility, the suggested retail price of the vehicle being auctioned is $44,620, and features seating for seven, rear air conditioning and audio controls, leather seating surfaces, 18-inch wheels and tires and an outstanding 305-watt Dolby Pro Logic II 5.1 digital surround sound stereo system.

The winning bidder not only gets to takes possession of the first new XC90 available for purchase, he or she will also have some company along for the ride. As part of the prize package, the top bidder receives two round-trip airfares to a city where Ashley Judd, who most recently co-starred in "The Divine Secrets of the Ya-Ya Sisterhood", is available to meet them for a drive in their new XC90. Judd by will be joined by Best Buddies founder and chairman, Anthony K. Shriver.

"This is an exciting event for Volvo and Best Buddies," commented Volvo Cars of North America President and CEO Vic Doolan. "The donation of this XC90 is the perfect showcase for our continued support and partnership with Best Buddies, and it's a fantastic opportunity for one lucky individual to be the first in the country to own what I like to call the first SUV with a conscience."

Those wishing to participate in the eBay online auction should log on to www.best buddies.org for more information.

Keywords:
XC90 (2002-2014), Events/Activities, Special Interests, 2003
Descriptions and facts in this press material relate to Volvo Cars' international car range. Described features might be optional. Vehicle specifications may vary from one country to another and may be altered without prior notification.
Related Images
Sep 18, 2003 ID: 575 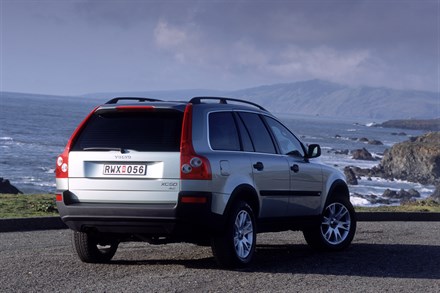