The XC60 Concept is very much a car for the future.  It not only offers the world a sneak preview of the next XC model to come from Volvo Cars. The concept car is also full of design innovation and it reveals several design elements that will be part of future Volvos.

Volvo Cars Design Director Steve Mattin and his team have designed the XC60 Concept while keeping their eyes firmly focused on one clear goal. “In recent years we have successfully emphasized the Scandinavian characteristics that base prestige on timeless, functional elegance. Now we’re elevating our design DNA to an entirely new level by literally pumping up our cars’ visual volume,” says Steve Mattin. He adds: “With more expressive, emotive shapes, it will be a magnet for the viewer’s eyes. If you say that you recognise a Volvo from 50 metres today, I want to get to the point where you will instantly spot it from twice that distance in the future.”

From the design viewpoint, the XC60 Concept is a daring, emotionally charged creation. The concept car, resplendent in a dashing Tin Bronze livery, has been spiced up with the very best from two dynamic car types.  “Down below, unmistakable and capable XC muscles pump up the car, giving it a purposeful stance with high ground clearance on large wheels. Above the waistline, the dashing lines trace the profile and sporty charisma of an elegant, sexy coupe”, says Steve Mattin.

Enlarged iron mark in the grille
The classic iron mark was reintroduced on Volvo’s cars almost two years ago and now it has been enlarged to make the brand image even stronger. Embedded in the trapezoidal grille, the large iron mark provides a distinctive signal that the future has arrived.

The new angled position lights on both sides of the grille are also part of the DNA of Volvo’s next car generation. Together with the headlamps and the sweeping front wings, they radiate an aggressive stance that also emphasizes the bonnet’s classic V-shape.

The skid-plates front and rear are integrated to give an elegant yet distinct signal that this is primarily a crossover with pronounced on-road properties.

The sculpted, emotive shapes that are such an important part of Steve Mattin’s design direction in the future become particularly pronounced when the XC60 Concept is viewed from the side.

With 20-inch wheels, accentuated wheel housings and aluminium scuff-plates, the muscular XC feel is emphasised in the lower half of the car, while the windows’ sleek profile and the dramatic roof line give the upper part a sporty coupe ambience.

New tailgate design
“At the rear, the expressive, sculptured shapes provide additional hints on the direction our design DNA is set to take. The contours of the tall tail lamps highlight the muscular shoulders and the tailgate’s trapezoidal shape is a further development of the glass tailgate in the Volvo C30,” explains Steve Mattin.

The tailgate design features another ingenious innovation. The lower part moves out and up over the upper part. This creates a sufficient opening for small items without requiring the entire tailgate to be opened. Of course, the tailgate can also be fully opened. The third alternative is to only open the upper part.

Another exciting solution is the dark panel in the lower part of the tailgate. Viewed from inside, it is transparent to improve the driver’s ability to see the area behind the car.  The roof is also transparent, with dark-tinted glass attached on top of a Y-shaped bearing structure.

At the rear, the Volvo name on the tailgate features more pronounced lettering with wider spacing than before. This too is a new feature that will be echoed throughout the model range to boost the brand’s image.

Elegant, high-tech interior
The XC60 Concept has an interior design that is at least as daring as the exterior. This applies particularly to the instrument panel and floating centre stack and the slim, visually floating front and rear seats.

The interior is dominated by the elegant combination of saddle leather and aluminium. The upper part is typically Scandinavian light, while the lower section has a contrasting dark, espresso brown shade.  Steve Mattin’s team has also given a lot of thought to lighting inside the cabin, with the aim of creating both functional areas of light and a pleasant ambience – mood lighting that emphasises the modern atmosphere inside the XC60 Concept.

Instrument pod with wings
The driver’s main instrument resembles a bumble-bee with a round analogue speedometer as the “body” in the middle flanked by two digital “wings” featuring display screens for other information. The instrument panel and the new steering wheel harmonize with the iconic floating centre stack, which is angled towards the driver. It is even slimmer than in today’s production models, freeing up additional storage space behind the console.

“The white iPod-inspired surface is almost like a smooth wall of snow, surrounded by a metal frame that emphasises the asymmetrical shape. Buttons and controls are entirely integrated into the surface, and the “invisible” screen for information and navigation appears only when it is switched on, starting up with a spectacular pulsating sequence. The screen image is back-projected, which makes the centre stack one of the innovative highlights of the interior,” says Steve Mattin.

The four rotary controls also come alive during the start-up sequence. All other buttons are touch-sensitive.  The unique gear selector is an innovation, a sliding control of the same type as found in the mixer-tables used by light and sound technicians. The doors’ control panels are also identical to the centre stack.

Slim seats
Volvo Cars is world-renowned for comfortable and ergonomically designed seats. In the XC60 Concept, they are refined even further with slim, asymmetrical lines that provide added comfort, particularly when climbing in and out of the car. The light-coloured seats appear to float above the dark floor.

All seats have integrated seat belts. The head restraints and backrests, in both the front and rear seats, feature a pony-tail slot. This feature was introduced a couple of years ago in the Volvo YCC (Your Concept Car), and in the XC60 Concept it has been extended all the way down the back to provide enhanced ventilation and improved rearward vision. The slots also feature integrated ambient lighting.  “By turning the head, the driver can see all the way through his or her own seat, through the rear seat’s backrest and through the transparent panel at the lower corner of the tailgate. This promotes added safety in a car type whose height may otherwise limit rearward vision,” explains Steve Mattin.

The pony-tail slots in the rear backrests feature the same type of attachment points as in the luggage compartment floor. This permits a whole variety of possibilities for using accessories or securing different types of loads. In addition, there is storage space for a specially designed XC60 Concept luggage set under the rear seats, conveniently accessible via the rear doors.

A promise of things to come
“The XC60 features a number of innovations that indicate what our cars will look like in a few years. It is time to once and for all forget all about boxy Volvos. Instead, we will make our Scandinavian design heritage more emotional and radiant by adding sculptured, exciting shapes and new, innovative features,” says Steve Mattin.

Keywords:
XC60 Concept, Concepts, Design
Descriptions and facts in this press material relate to Volvo Car UK's car range. Described features might be optional. All information is correct at time of going to press and may be altered without prior notification.
Related Releases 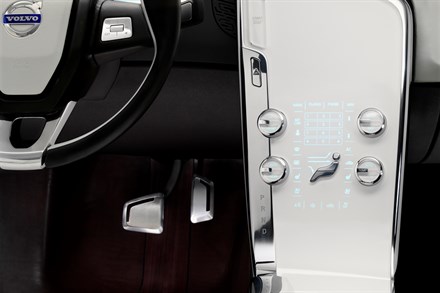