Volvo is convinced that the car will continue to maintain an important role in the future. Man’s need for freedom of movement and independence is unassailable. However, this should not take place at the cost of the global environment. Environmental demands promote smaller and more energy-efficient cars. At the same time, we must ensure that people are transported in a safe manner, which has customarily implied larger cars. A difficult equation.

Incompatible demands?
The Volvo Monitoring and Concept Centre (VMCC) in Camarillo, California, has tried to make some sense of this equation by looking for new angles.
“The brief was to develop a car for the future”, says Lex Kerssemakers, Senior Vice President, Brand, Business and Product Strategy at the Volvo Car Corporation. “A car that is environmentally efficient and that also takes up little space on the road. It also has to be comfortable, enjoyable to drive, attractive to look at and, not least, safe to ride in. We simply had to adopt an entirely new approach.”
The result is the Volvo 3CC, a sporty and appealing, extremely aerodynamic and compact car equipped with an energy-efficient electric motor. The 3CC has space for three adults or two adults and two children. It also embodies a unique safety solution.

Volvo Safety Ride Down Concept – a breakthrough
While working on the 3CC, Volvo’s engineers struggled with the issue of slowing down and absorbing incoming collision forces in a frontal impact in the shortest possible crush zone. A small car with a short front has very limited space for deformation. At the same time, the occupants’ forward motion must be controlled as gently as possible.
The occupant deceleration is the sum of the car’s deceleration and the ride-down in the interior restraint systems. In a small car, like the 3CC, the car’s deformation is limited. In order to compensate for this, an increase in the interior ride-down length is necessary. With this approach it is possible to provide a similar level of soft stop for the occupant despite the limited car deformation available. This is a more advanced system following the same principles of conventional systems as collapsible steering column and load limiting seat belts.
This reasoning led to the Volvo Safety Ride Down Concept, a unique solution with a seat system that moves forward, a bit like a sled, at the same time as the front is deformed. This movement is slowed with the help of adaptive shock absorbers that tailor the damping effect to suit the collision force and the occupants’ number and weight. The interior can be moved between 0 and 200 mm forward, which has the same overall effect as extending the crumple zone by a corresponding length.

All seats move forward
The moving part of the interior encompasses the front seats, rear seat – and the floor panel between the two areas.
What is more, the steering wheel and a movable dash panel move forward as well, to create space for the driver’s movement. The sliding components are unlocked and the dampers activated in the event of a crash severe enough to deploy the airbags.
The seats slide forward/rearward on guide-tracks. The system is also extended for rear impact by allowing the seats to translate rearward by 75 mm, which reduces the forces on the occupants.
The moving interior is also utilised to aid entry to the rear seat. All it takes is to press a button on the door pillar and all seats slide forward.

Virtual tests
“The Volvo Safety Ride Down Concept has been tested in a virtual environment for over three years”, says Kolita Mendis, Structures and Safety Engineering Manager at VMCC. “The tests give us a pretty good picture of the forces we’re up against and how best to handle them.” He adds, “the Volvo Safety Ride Down Concept has appeared from time to time as an interior safety concept proposal in one form or another for more than forty years. Our virtual testing has showed that the most important part of a ride-down system is the energy absorber, and that it needs to be adaptive in order to be a viable concept, by responding to differences in occupant load and crash severity”.

Lightning-quick adaptive dampers
The dampers that are used to retard the movement of the interior are based on the same technology as those found in adaptive shock absorbers that were first introduced in Volvo’s advanced R-models. Prototypes have been further developed in cooperation with two Swedish universities, the Chalmers University of Technology in Göteborg and Luleå University. The dampers are hydraulic and operate electronically. These dampers can be adjusted every two milliseconds. The impulses can come from a number of sensors that read off such parameters as vehicle and seat deceleration, as well as inputs from the occupant restraint system.
“The Volvo Safety Ride Down Concept is a promising stage in our protective safety development”, says Ingrid Skogsmo, Director Volvo Cars Safety. “We’ve learned a lot in the process. The next step could be to continue developing technologies from the concept stage.”

Keywords:
V50, 3CC, Safety, Concepts
Descriptions and facts in this press material relate to Volvo Car UK's car range. Described features might be optional. All information is correct at time of going to press and may be altered without prior notification.
Related Releases 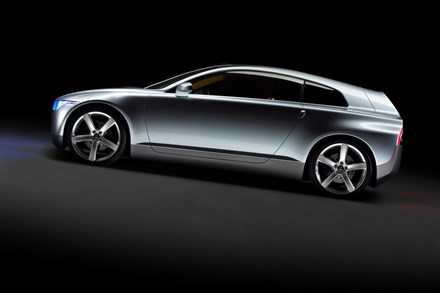