A competition to track down and win the last ever Volvo C30 reached a thrilling climax this weekend as the winning couple grabbed the keys to their brand new car.

James and Christie McKenzie were first to find the car on the promenade in Clacton-on-Sea, after following the competition for three days and completing a four-hour drive from their home in Banbury. They arrived to claim the keys at the secret location just minutes ahead of rival treasure hunt teams who had travelled from Birmingham, Kent and Devon.

Mechanical engineer James, 27, spotted the C30 as the couple drove along the seafront searching for the prize and ran over to complete the final task - to tweet @VolvoCarUK with the hashtag #GiveMeTheKeys and a picture of the car. Once verified, James and Christie were declared winners of the last ever Volvo C30 off the production line, worth £29,000, complete with a Polestar performance upgrade.

"We'd followed the competition online and, knowing that the car was hidden somewhere in the East of England, we decided to head there early on Saturday morning in the hope that we could work out the final location and be close by. As it turned out, we were on the right road when it was revealed to be Clacton-on-Sea so we came straight here," said James.

"As we were driving along the sea front, we saw it parked there and quickly stopped to jump out and complete the final task. It's amazing that we've won - we were certain someone else was going to get here first."

The unique competition was launched last Thursday with a real-time three-day game at http://www.lasteverc30.co.uk/  It quickly captured the nation's imagination, becoming the UK's top trending Twitter subject on Friday.

The final UK location of the C30 was determined by Twitter users who put the name of the area they lived in and used the hashtag #LastEverC30. The East of England received the highest number of tweets, and the car was taken to the secret location - Clacton-on-Sea - for the final challenge on Saturday morning. James and Christie solved four clues to track down the C30 and then headed to the seaside resort in a final bid to find the car and claim the keys.

Christie, whose family and friends around the world were following their treasure trail journey online, immediately phoned her mum to reveal they had won the car.

"We first saw the C30 at a motorshow when it was launched and have wanted one ever since," she said. "James is a real petrolhead too, and has missed having a sports car, so this is absolutely perfect for him - but it does mean we're going to fight over the keys!"

Keywords:
C30, Events/Activities, 2013
Descriptions and facts in this press material relate to Volvo Car UK's car range. Described features might be optional. All information is correct at time of going to press and may be altered without prior notification.
Related Images
Jun 18, 2013 ID: 49647 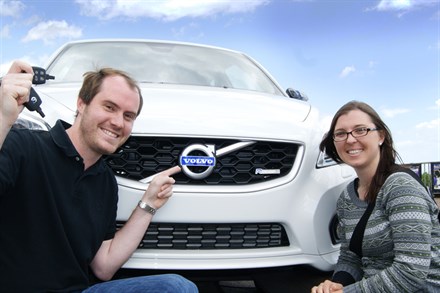