Team Volvo, comprising two members of the British Bobsleigh Team and two amateurs, took to the ice at the Olympic Sliding Centre against GBR 1, currently ranked 5th in the world, armed forces' teams with British Bobsleigh Athletes, and privateer entries. The team was put together as part of Volvo Car UK's sponsorship of British Bobsleigh.

With only two days at the bobsleigh push track at Bath University with British Bobsleigh trainers, the team first laid eyes on the track and took their first steps on the ice on the morning of the qualification runs the day before the championships.  Having successfully completed the push off, loading of the sled and passing the finish line without incidents, Team Volvo qualified to take on the nation's best bobsleigh athletes.

On the morning of the British Championships, Team Volvo lined up at the start line, just behind GBR1, made up of John Jackson, Stuart Benson, Bruce Tasker and Joel Fearon.  Once GBR1 had cleared the track, Team Volvo's sled, nicknamed ‘Glacies Tempestas'  was placed in the start grooves, and with a battle cry the team was set.  After the team successfully loaded into the sled, it was up to Lee Johnston, British Bobsleigh Coach, to drive along the 1200 meter track, around the 14 corners and through the finish line.

Finishing the first run in third place, it was up to the team to continue the good start, and with true determination the team held off the other teams from behind and finished in third place overall.

"It's great to see Volvo here at the British Bobsleigh Championships, and not just as a spectator but also competing.  There are few people that have been privileged to go down the track in a bobsleigh, let along be part of a team entry, they can consider themselves amongst the few.  With very little track time, the whole team not only impressed me, but also a number of the more established athletes in the GB team" said Gary Anderson, Performance Director of British Bobsleigh.

Volvo Car UK is the official car supplier to the British Bobsleigh Team, providing two XC60s and a V60 fitted with tyres from Volvo's Winter Tyre Program, for the support staff and athletes.

Members of Team Volvo were:

The invention of Bobsleigh has been ascribed to a group of Englishmen on holiday in St Moritz, Switzerland. British Bobsleigh is the National Governing Body (NGB) for Bobsleigh, founded in 1927, and is responsible for the safe management of the sport and GBR Teams. British Bobsleigh is governed globally by the Federation Internationale de Bobsleigh et Tobogganing (FIBT) was founded in 1923 and is the international governing body for the sport of bobsleigh.

The design of bobsleighs is strictly specified by FIBT rules, which dictate a minimum weight empty and a maximum weight with crew, as the heavier the bobsleigh, the faster it will be. The minimum mass for 4-Man bobsleigh empty is 210 kg, and the maximum mass with crew is 630 kg (over half a ton).

Bobsleighs are articulated forward of the driver's seat, so the front can within limits rotate in relation to the rear, which enables the four runners to remain more in contact with the ice on the banked corners. Both the design and the material used in the manufacture of the steel runners is also strictly specified and the temperature is also controlled.

There are two distinct parts to a successful Bobsleigh run:

The Start - faster the start, the faster the momentum you can carry down the run.

The Drive - A Bobsleigh is steered through front runners. The equation is simple: if you steer too much, it will slow you down; If you don't steer enough you will crash.

Keywords:
Life Style, Events/Activities, Special Interests, Sponsorship
Descriptions and facts in this press material relate to Volvo Car UK's car range. Described features might be optional. All information is correct at time of going to press and may be altered without prior notification.
Related Images
Mar 11, 2013 ID: 48309 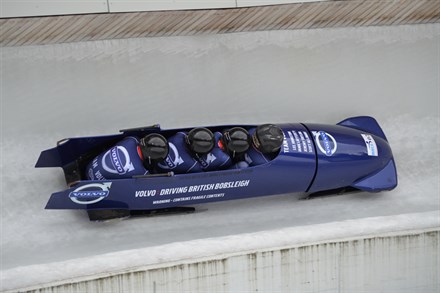