"We're now taking our technological future into our own hands. Both our new architecture and the new engine range will enable us to be on par or even beat our competitors in crucial areas such as driving dynamics and fuel efficiency," says Peter Mertens, Senior Vice President Research and Development at Volvo Car Corporation.

Volvo Car Corporation is promoting economies of scale within the company's own model range via a separate architecture for most of its products.

Within the new joint SPA (Scalable Product Architecture) there are several groups of cars that share the same basic chassis structure, seat frame, electrical system and driveline.  These plfatforms are the basis for different vehicle clusters, that is to say a number of complete car models. In today's model range, for instance, the Volvo S60, V60 and XC60 form one cluster.

"SPA gives us a fresh technological start. When the first SPA model is launched in a few years' time, about 90 percent of its components will be new and unique. What is more, we're raising the bar when it comes to quality and technology level in every area. We will be fully on a par with our competitors," says Peter Mertens.

With SPA, Volvo Car Corporation takes the lead in automotive lightweight design. The highest degree of high strength steel qualities in the industry to date is combined with the extensive use of aluminium in the front structure, doors, chassis and power train.

The electrical architecture enables all future multimedia and connectivity solutions - and it forms the backbone of Volvo Car Corporation's drive to reinforce its leading position in active safety.

"For us the new architecture means we can sharpen our design language still further, carving out just the right athletic and dynamic aura that is so important to the most demanding prestige car buyers. Concept You is an excellent example of this. It shows what can be achieved with the new architecture." explains Peter Horbury, Vice President Design at Volvo Car Corporation

VEA is a modular range of diesel and petrol engines with diesel using common rail and petrol using direct injection as standard. Several levels of turbo charging open up for flexibility that encompasses the whole range from high power and torque variants to fuel-efficient derivatives. In order to cover all customer requirements, certain engines will gain added performance via hybrid drive or other spearhead technology.

"At present, engine installation varies with each car model. With this holistic solution tomorrow's technology development can focus entirely on engine performance instead of diverting attention to installation modifications. What's more, assembly in the factory will be easier. The development costs are initially high but after that they drop sharply," explains Peter Mertens.

Later this autumn, Volvo Car Corporation will become one of the first carmakers in the world to test the potential of flywheel drive on public roads.

Flywheel drive, also known as Flywheel KERS (Kinetic Energy Recovery System), is fitted to the car's rear axle, while the engine drives the front wheels. When the brakes are applied, the resulting braking energy causes the flywheel to spin at up to 60,000 revs per minute.

Technology, Concept You
Descriptions and facts in this press material relate to Volvo Car UK's car range. Described features might be optional. All information is correct at time of going to press and may be altered without prior notification. 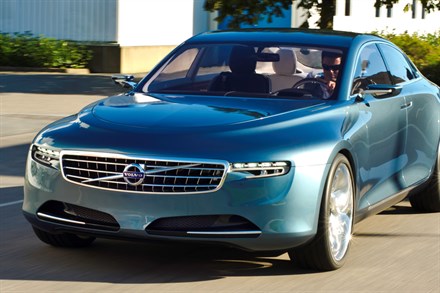