In the end, the formbook predictions proved correct as Englishman Paul Casey won the inaugural Volvo Golf Champions in Bahrain, but he was pushed all the way down the stretch on the final day's play to win the first prize and a place in the Volvo World Match Play Championship in Spain in May.

The 33-year-old Arizona-based Casey won by a single shot from Sweden's Peter Hanson, who pushed his playing partner all the way, as did Spanish star Miguel Angel Jiménez as a sudden-death play-off looked a distinct possibility over the final few holes.

Casey finished on 20-under-par, one ahead of Hanson and Jiménez to win the European Tour's newest event and said, "I'm ecstatic," adding, "It was just Peter [Hanson] and I coming down the last, he opened the door slightly and I'm just happy I had the opportunity and took it."

Casey, who won the 2006 Volvo China Open and made it a ‘full house' of Pro-am, Amateur Pro Team Competition and Volvo Golf Champions also qualifies for the Volvo World Match Play Championship at Finca Cortesín in May.

"I'm absolutely thrilled to have secured my place in the Volvo World Match Play Championship, " said Casey, whose appearance last time was plagued by injury, explaining, "I came with an injury and obviously hope to do be able to perform much better injury-free this time."

He continued, "It is an important two weeks on the European Tour, the Volvo World Match Play Championship followed by the PGA Championship," continued the man who won the world match play championship during its Wentworth years," adding, "New format this year, the names confirmed so far are some of the best there are and it's going to be a great week."

And he confirmed he will be back in Bahrain next year to defend his newly-won Volvo Golf Champions title, saying, "I believe it is always important to defend your titles if at all possible and it will be great to come back in Bahrain early next year."

Runners-up Peter Hanson and Miguel Angel Jiménez finished on 20-under-par, whilst champion Casey earned 45 Official World Ranking Points, climbing up to the third place on the Race to Dubai rankings.

More info about the event and pictures to download on www.volvogolfchampions.com

Keywords:
Special Interests, Sponsorship
Descriptions and facts in this press material relate to Volvo Car UK's car range. Described features might be optional. All information is correct at time of going to press and may be altered without prior notification.
Related Images
Jan 30, 2011 ID: 36415 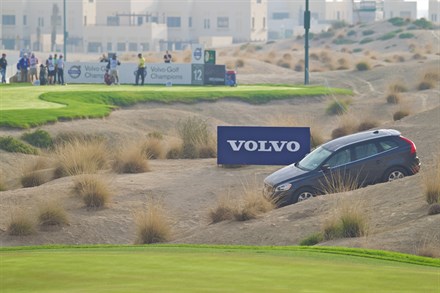