A new App launched by Volvo, in association with http://www.cleangreencars.co.uk/ dispels the myth that small cars are automatically low emission cars.

The free App which is available for the iPhone reveals the toxic emissions which impact local air quality and human health, such as carbon monoxide, oxides of nitrogen, hydrocarbons and particulates.

By using the App, Volvo highlighted a V70 2.5 petrol manual estate which generates 201mg/km of toxic emissions, compared with the 1.2 litre Fiat 500 Start Stop supermini, which at 425 mg/km generates more than twice as many toxic emissions as the Volvo.

Volvo's App shows the ‘dirtiest' car on sale generates a hefty 2080mg/km of toxic emissions, with a number of others emitting over 1000mg/km. The Bottom 20 table includes a surprising mix of cars, including a 1.2 litre petrol supermini, a low emission branded small family car and a mix of family cars and people carriers.

Volvo product performs generally quite well with the C70 2.4 170PS generating the lowest emissions (121mg/km - Band A) in the small sports sector, while the S40 D5 Geartronic sits in Band A of the Compact Executive Sector at 271mg/km.

The App has been built with http://www.cleangreencars.co.uk/ using data supplied by the Vehicle Certification Agency (http://www.vca.gov.uk/ ), the Government agency which publishes the official environmental details of all new cars sold in the UK.  The App is available at http://itunes.apple.com/gb/app/emissions-equality/id389567557?mt=8 once iTunes is downloaded onto a PC.

"What our Emissions Equality programme aims to do is to help drivers make more informed decisions by giving them access to the total emissions data of their car. Ultimately by using the information on our App, drivers can genuinely help improve local air quality," he added.

In conjunction with the new App, Volvo Car UK has also launched an online Facebook petition to mobilise the masses to try and influence Government into mandating the information contained in the App to be available in all car dealerships.  Details can be found at www.facebook.com/insidevolvouk.

Keywords:
Environment
Descriptions and facts in this press material relate to Volvo Car UK's car range. Described features might be optional. All information is correct at time of going to press and may be altered without prior notification.
Related Images
Oct 04, 2010 ID: 35238 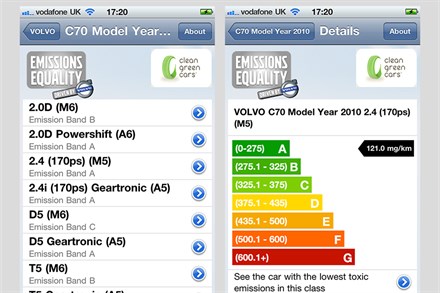