Following the huge success in Galway when it was the finish of the transatlantic leg of the Volvo Ocean Race 2008-09, Ireland, will again feature in the new route for 2011-12. The fleet will race from Lorient in France back to Galway on Ireland's west coast.

Galway, whose twin town is Lorient, has fought an intense contest against the other bidding ports to win back the event for a second edition and the Volvo Ocean Race 2011-12 will complete its lap around the globe in Ireland's ‘cultural heart', where the final prizegiving will be held.

The Taoiseach (the prime minister of Ireland, Brian Cowen), stated:

"The 2009 stopover in Galway made an abiding impression on the sailors, support crews, organisers and media, who were immersed in the warmth of an Irish welcome.

"Their presence, in turn, had an enormous beneficial impact on Galway, the west of Ireland and indeed the entire country. Their arrival here was spectacular and their visit helped generate a massive 55 million Euros for the regional economy, more than one third higher than the original projections

"Given its economic benefits and its importance to Irish tourism, I am more than happy to welcome the return of the Volvo Ocean Race to our shores and pledge our support for the event".

The stopover in Galway during May 2009 fuelled the public imagination as never before.  Over 600,000 supporters visited the race village during the stopover, with the crowd peaking at 62,000 people on in-port race day alone.  The seaside resort of Salthill drew a further crowd of 120,000 to watch the dramatic close combat race from the shoreline.

Galway's ‘home town boat', Green Dragon, became Ireland's second entry in the race - the first was NCB Ireland in1989-90.  Double Olympic medallist, Ian Walker, guided the team to a fifth place finish overall and claimed the third spot on the podium when the fleet crossed the finish in Galway, delighting the huge crowd that had gathered to welcome them.

"The interest in hosting the Volvo Ocean Race, particularly in Europe, has been quite overwhelming," said Volvo Ocean Race CEO, Knut Frostad, as the last of the European ports was unveiled. "I am very proud to confirm Ireland's participation and Galway will be a magnificent port to stage the finish of the event.  We have already experienced the enthusiasm that abounds in Ireland for the race and we are looking forward to bringing the competition to its conclusion in a country that really knows how to celebrate," he said.

This announcement completes the list of European cities hosting the event. The remaining ports will be introduced throughout March.

The Volvo Ocean Race traces its origins back to 1973 and is the world's premier offshore sailing race. The Volvo Open 70 racing boat is sailed by professional athletes, who race around the world with the prevailing winds.

Keywords:
Special Interests, Sponsorship
Descriptions and facts in this press material relate to Volvo Car UK's car range. Described features might be optional. All information is correct at time of going to press and may be altered without prior notification.
Related Images
Jun 16, 2009 ID: 19833 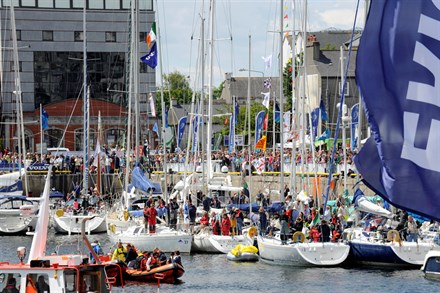