Having been a partner of British Triathlon and supported paratriathletes Lauren Steadman, Claire Cashmore and Dave Ellis for a number of years, Volvo Car UK will be helping to drive forward the event in the Welsh city in what is a first for paratriathlon in Britain.

All three athletes competed at last year’s event in Leeds, supported by Volvo, which saw both Ellis and Steadman take home gold.

The Volvo 2022 World Triathlon Para Series Swansea is a key part of British Triathlon’s Major Event Strategy in the lead up to Paris 2024 Paralympic and Olympic Games.

The World Triathlon Para Series is the highest level of paratriathlon competition on the annual calendar, and will take place in Yokohama and Montreal in addition to Swansea this year, with Abu Dhabi hosting the Paratriathlon World Championships in November.

Andy Salmon, British Triathlon CEO, said of the partnership: “We’ve worked closely with Volvo Car UK for a number of years. This is a really exciting development in our relationship as we seek to grow and develop paratriathlon in Britain and globally, helping to prepare Paralympic champions as we move towards Paris.

“Hosting World Triathlon Para Series racing in Britain has been a long-held ambition for us as the national governing body, and this partnership is a key driver in us achieving this.

“I look forward to working with Volvo Car UK as the event comes ever closer and to welcoming the world’s elite paratriathletes and spectators to the Volvo World Triathlon Para Series Swansea in August.”

Kristian Elvefors, Managing Director of Volvo Car UK, said: “Through our partnership with British Triathlon we’ve seen monumental growth of the sport and witnessed first-hand how the sport continues to break boundaries. Having the first standalone World Triathlon Para Series race in Britain shows the progress being made to achieve equality in sport and we are proud to be part of the journey.

“We are thrilled to be able to help provide paratriathletes with the opportunity to compete on their home stage at the highest level. We’re looking forward to the historic event in Swansea and wish all the athletes the very best of luck.”

At Volvo Car UK, sustainability is as important as safety, and Volvo has committed to be all-electric by 2030 and climate neutral by 2040. The C40 Recharge is the first Volvo car available only as a pure electric model and boasts a leather-free interior, giving consumers the opportunity to drive sustainably without compromising on style, comfort or safety.

Keywords:
Corporate News
Descriptions and facts in this press material relate to Volvo Car UK's car range. Described features might be optional. All information is correct at time of going to press and may be altered without prior notification.
To view the full copyright information click here
Media Contacts
Related Images
Apr 28, 2022 ID: 298686 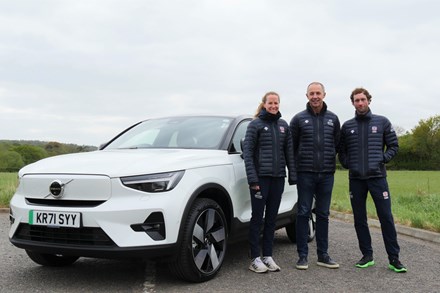