In March, Volvo Cars’ global sales reached 46,395 cars, down 31.2 per cent compared with the same period last year, led by weakening demand in Europe and the US. China, meanwhile, is showing signs of recovery, as showroom traffic continues to improve.

During the January-to-March quarter, the XC60 was the top-selling model for the company, followed by the XC40 and the XC90. SUVs accounted for 67.9 per cent of the company’s total sales in the period, up from 60.3 per cent in the first quarter last year.

Volvo Cars’ Recharge line-up of chargeable Volvo models maintained a strong sales momentum in the first quarter of the year, making up 14.7 per cent of all cars sold in the period. The comparable share at the end of the same period last year stood at 7.4 per cent. Recharge is the overarching brand name for all chargeable Volvo models with a fully electric or plug-in hybrid powertrain.

China sales during the quarter reached 20,780 cars, down 30.5 per cent compared with the same period last year, primarily due to the lower sales performance in January and February. In March, showroom traffic in the region started to pick up pace. Earlier this month, Volvo Cars also reopened its four manufacturing plants in China after an extended closure period due to the spread of the Coronavirus.

US sales in the January-to-March period stood at 19,485 cars, down 11.7 per cent compared with the same period last year. A majority of states in the country have now implemented stay-at-home orders, which have led to a significant drop in showroom traffic in March that affected the first-quarter volumes.

Volvo Cars’ sales in Europe reached 70,510 cars in the first three months of the year, down 18.5 per cent compared with the same period last year. The sales performance was significantly impacted in March due to restricted movement in several key markets, including Germany, the UK, France, Italy and Belgium.

Under its new company purpose, Volvo Cars aims to provide customers with the Freedom to Move in a personal, sustainable and safe way. This purpose is reflected in a number of business ambitions: for example, by the middle of this decade it aims for half of its global sales to be fully electric cars and to generate half of its revenue from its direct consumer business. Volvo Cars is also committed to an ongoing reduction of its carbon footprint, with the ambition to be a climate-neutral company by 2040.

Keywords:
Sales Volumes
Descriptions and facts in this press material relate to Volvo Car UK's car range. Described features might be optional. All information is correct at time of going to press and may be altered without prior notification.
To view the full copyright information click here
Related Images
May 28, 2019 ID: 253680 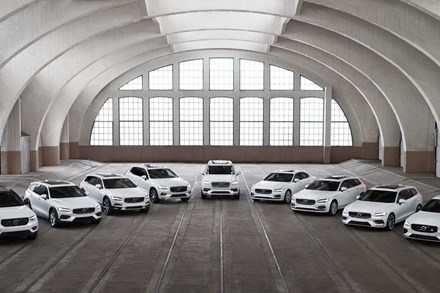