Volvo Cars has been recognised for its sustainability ambitions at the annual Plastics Recycling Awards Europe, winning a prestigious award for a specially built version of its XC60 T8 Twin Engine plug-in hybrid SUV that contains high levels of recycled plastics.

The car won the inaugural award in the Automotive, Electrical or Electronic Product of the Year category, announced at a special ceremony in Amsterdam, the Netherlands, yesterday.

Last year, to demonstrate the viability of its recycled plastics ambition, the company unveiled a special version of its XC60 T8 Twin Engine plug-in hybrid SUV that looks identical to the existing model, but has had several of its plastic components replaced with equivalents containing recycled materials.

The car is a symbol for Volvo Cars' ambition that from 2025 at least 25 per cent of the plastics used in every newly launched Volvo car will be made from recycled material. It is the most progressive statement on the use of recycled plastic by any premium car maker, and highlights Volvo Cars' commitment to reducing its impact on the environment as well as a more circular approach to the development of its cars.

For example, the car's interior has a tunnel console made from renewable fibres and plastics from discarded fishing nets and maritime ropes. On the floor, the carpet contains fibres made from PET plastic bottles and a recycled cotton mix from clothing manufacturers' offcuts. The seats also use PET fibres from plastic bottles. Used car seats from old Volvo cars were used to create the sound-absorbing material under the car bonnet.

"If we want to be serious about minimising the global footprint of our industry, we need to be more efficient with the use and reuse of materials," said Martina Buchhauser, Senior Vice President for Procurement. "Volvo Cars is committed to doing its part in this transition, and increasing the use of recycled plastics in our cars is an important element of that ambition."

The XC60 demo vehicle is also part of Volvo Cars' call to auto industry suppliers to work more closely with car makers to develop next-generation components that are as sustainable as possible. An increased availability of recycled plastics will be necessary if the company is to realise its ambitions in this area, and Volvo Cars has already received plenty of positive response from its supplier base.

The centrepiece of Volvo Cars' commitment to reducing the environmental impact of both its products and operations was announced in 2017 when the company made its industry-leading commitment to electrify all new Volvo cars launched after 2019. Volvo Cars has since reinforced this strategy by stating that it aims for fully electric cars to make up 50 per cent of its global sales by 2025.

Volvo Cars also aims for climate-neutral global manufacturing operations by 2025. In 2018, the company's engine plant in Skövde, Sweden, became the first climate-neutral facility in its global manufacturing network. It also revealed a solar panel installation at the company's Ghent factory in Belgium last year. Last month, it announced plans for a brand-new paint shop at its Torslanda plant in Sweden, which will result in an expected reduction of paint shop energy consumption and emissions by at least one third.

In addition to addressing energy consumption and emissions, Volvo Cars is also committed to using less plastic in its operations. It is in the process of removing single-use plastics from all its offices, canteens and events across the globe by the end of 2019. Items such as cups, food containers and cutlery are replaced with more sustainable, biodegradable alternatives made of wood, paper and pulp. 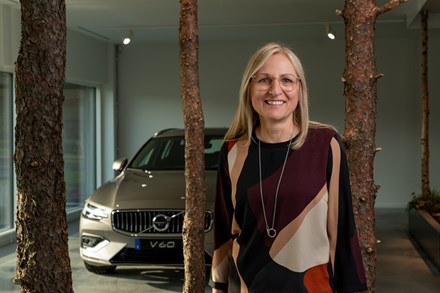