Volvo Cars is making its ground-breaking, industry-first connected safety technology available across Europe as another step in its ambitions to improve traffic safety.

The technology allows Volvo cars to communicate with each other and alert drivers of nearby slippery road conditions and hazards via a cloud-based network.

Hazard Light Alert and Slippery Road Alert were first introduced in 2016 on Volvo’s 90 series cars in Sweden and Norway. Next week, the features become available to Volvo drivers across Europe. They come as standard on all new model year 2020 Volvos and can be retrofitted on selected earlier models*.

When they were introduced, Volvo Cars’ systems were the first of their kind in the automotive industry. As soon as any equipped Volvo switches on its hazard lights, the Hazard Light Alert sends a signal to all nearby Volvo cars connected to the cloud service, warning drivers to help avoid potential accidents. This is particularly useful on blind corners and over the crest of hills in the road.

Meanwhile, Slippery Road Alert increases the driver's awareness of both current road conditions and those on the road ahead by anonymously collecting road surface information from cars farther ahead on the road and warning drivers approaching a slippery road section in advance.

Last month, Volvo Cars made a number of announcements aimed at supporting better driver behaviour and safer driving. From 2020, all Volvos will be speed-limited to 112mph (180kph). Starting in the early 2020s, the company will also install in-car cameras and other sensors that monitor the driver and allow the car to intervene if a clearly intoxicated or distracted driver is risking an accident involving serious injury or death.

Finally, the company announced that, for the first time, it is making its safety knowledge easily accessible in a central digital library, which it urges the car industry to use in the interest of safer roads for all.

*Hazard Light Alert and Slippery Road Alert are available on all Volvos based on the company’s Scalable Product Architecture (SPA) or Compact Modular Architecture (CMA) platforms from model year 2016 and onwards.

Keywords:
Product News
Descriptions and facts in this press material relate to Volvo Car UK's car range. Described features might be optional. All information is correct at time of going to press and may be altered without prior notification.
To view the full copyright information click here
Media Contacts
Related Images
Apr 15, 2019 ID: 251539 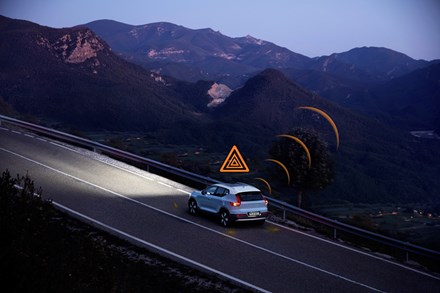 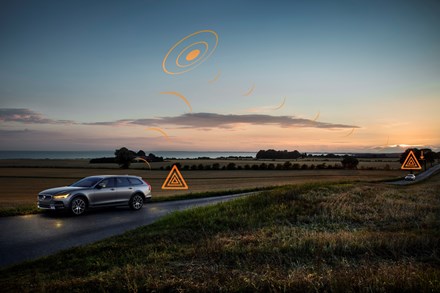