• Volvo is proud to support the United Nations' Clean Seas campaign and Turn the Tide on plastic, as part of its business-wide focus on safeguarding and improving the environment

A team from Volvo Car UK joined their colleagues around the world in a global beach-cleaning initiative to raise awareness and help tackle plastic pollution in our oceans.

A group of 24 Volvo UK staff, together with some of Volvo's British Sailing Team brand ambassadors, took to the shoreline at Lee-on-the-Solent in Hampshire for the clean-up to help support the 2018 United Nations World Environment Day.

Around the world, more than 850 Volvo Cars employees and retailer staff in 16 countries put down their tools, left their desks and picked up litter in aid of World Environment Day and the UN Environment's Clean Seas campaign.

The UK group were between them able to provide more than 70 man-hours of litter clearing. The sailors among them are keenly aware of the hazards to seawater quality and marine life from discarded plastic and other waste, and were pleased to be able to lend practical help to the initiative and raise awareness of this urgent environmental issue.

The brand ambassadors taking part were some of Britain's best-known and most accomplished sportsmen and women, including multiple World and Olympic champions and medallists. Chris Grube, Jess Lavery, Eilidh McIntyre, Hannah Mills, James Peters, Chris Rashley and Ian Walker all lent their support.

Ian Walker MBE, Director of Racing at the Royal Yachting Association, said: "Having sailed around the world three times in the Volvo Ocean Race, I've seen just how bad plastic has been on the environment. As sailors, we spend most of our time out on the seas and oceans, and we're absolutely delighted to partner with Volvo because they care so much for the environment."

Jon Wakefield, Managing Director of Volvo Car UK, said: "We take our environmental responsibilities seriously here at Volvo, and this beach clean initiative really helps to raise awareness of plastic pollution in our oceans. As a company, we have also started to remove single-use plastics from our offices and factories, and by 2025 our aim is to be carbon neutral in all our manufacturing plants across the world."

World Environment Day, established in 1974, is dedicated to taking action and taking care of the earth, and this year's theme is 'Beat Plastic Pollution'. According to the United Nations Environment Programme, more than eight million tonnes of plastic ends up in our oceans each year. If nothing is done to alleviate the situation, by 2050 there will be more plastic than fish in the sea.

Volvo Cars is proud to mobilise its workforce in support of the Clean Seas campaign and help Turn the Tide on Plastic. This initiative extends the company's own Volvo Cars Beach Clean Up campaign, which has been running since the start of the Volvo Ocean Race in October last year. To date, more than 600 employees have undertaken clean-ups in Race stopovers on every continent, as well as areas local to Volvo Cars' offices and facilities. Last month, Volvo Cars took action within its own operations by announcing that it will eradicate single-use plastics across all its premises and events by the end of 2019.

In its wider commitment to environmental responsibility, the company last year announced an industry-leading commitment to electrify all new Volvo cars launched after 2019. It has since reinforced this strategy, stating in April that it aims for fully electric cars to make up 50 per cent of its global sales by 2025. 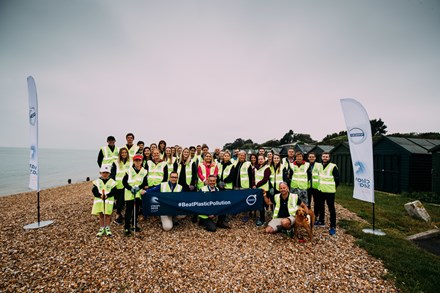 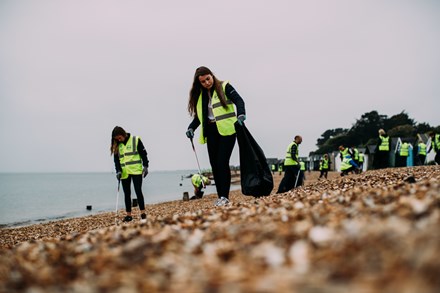