This is the first instance of Volvo Cars sharing safety-related data with another company. The collaboration with Volvo Trucks represents the first step towards achieving a critical mass of connected vehicles that could have a significant impact on overall traffic safety.

“Sharing real-time safety data based on our connected safety technology can help avoid accidents,” said Malin Ekholm, Vice President of the Volvo Cars Safety Centre. “The more vehicles we have sharing safety data in real time, the safer our roads become. We look forward to establishing further collaborations with other partners who share our commitment to traffic safety.”

Hazard Light Alert has been available in Sweden and Norway since 2016, where it is standard on all 90 and 60 series cars, as well as the XC40. Adding selected models of Volvo Trucks’ fleet to the cloud will cover more area, identify more potential hazards and boost overall traffic safety. Both Volvo brands represent a considerable portion of new vehicle registrations in the region.

“Connected safety allows Volvo drivers to virtually ‘see around the corner’ and avoid a critical situation or accident before it happens,” said Malin Ekholm. “The ability to see farther ahead and avoid hazards is something we want to share with as many drivers as possible.”

By anonymising, validating and aggregating the data that is collected and shared, the initiative will comply with the General Data Protection Regulation (GDPR) that is rolled out across the EU this year. 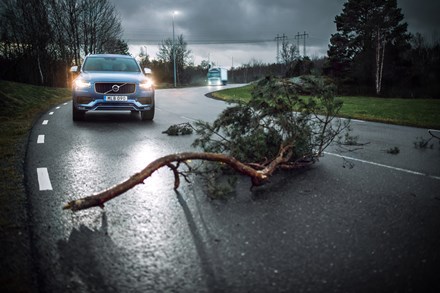