• Volvo's first ever compact SUV selling at 2,000 cars a month

The Volvo XC40 premium compact SUV is proving a smash hit across the globe, and the UK is no exception. Selling at twice the Swedish firm's own sales forecast rate, more than 3,000 XC40s have been sold in the UK since it was launched in a nationwide retailer event in late February.

With sales currently at 2,000 cars a month, the XC40 has immediately become the most successful new model launch ever in the UK.

These remarkable figures are especially significant because the XC40 is Volvo's first ever compact SUV, and it is already taking conquest sales from the likes of Audi, BMW, Mercedes-Benz and Range Rover.

Since it was launched, the XC40 has also won the European Car of the Year and What Car? Car of the Year awards, being praised for its lively performance, quality, style, comfort and safety.

The first cars in the UK were the lavishly equipped First Edition XC40s, of which more than 1,000 examples were available. Almost all of these were sold even before the car had arrived in retailer showrooms.

The XC40 combines bold design with cutting-edge connectivity, ingenious interior storage and Volvo's industry-leading safety technology. It is available with a range of petrol and diesel engines, with front- and all-wheel drive, and with a manual or automatic gearbox, allowing customers to choose the perfect XC40 for them.

Commenting on the sales performance, David Baddeley, Volvo Car UK's Operations Director, said: "The XC40 is already proving to be a huge success, fuelled by the number of high-profile awards it has won recently. This enthusiasm is reflected in the number of early customers who have ordered their XC40, and we see this demand only increasing now the first customer cars are appearing on UK roads."

Volvo Car UK recommends that anyone interested in buying an XC40 talks to their retailer as soon as possible to place their order.

For more information on the Volvo XC40, and to use the new online configurator, please go to www.volvocars.com/uk/cars/new-models/xc40

Keywords:
Corporate News, 2018, XC40
Descriptions and facts in this press material relate to Volvo Car UK's car range. Described features might be optional. All information is correct at time of going to press and may be altered without prior notification.
To view the full copyright information click here
Media Contacts
Related Images
Apr 10, 2018 ID: 227199 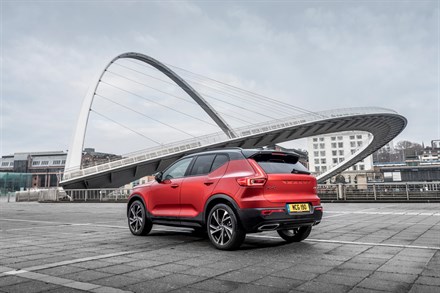