The Volvo XC90 T8 Twin Engine Momentum has won the first ever 'Best Hybrid' award at the Tow Car Awards.

The seven-seat XC90 was praised for its excellent performance, its stability, handling and braking when towing, and for its practical boot. The testers were also impressed with the amount of room the XC90 T8 offers – its hybrid batteries are stored between the front seats, so they don't compromise the available cabin space, unlike in many hybrid cars.

David Motton, Tow Car Editor, Practical Caravan magazine, said: "Over the years, we've towed with quite a few hybrids, but not all have been able tow cars. However, the XC90 T8 is up with the best we've tested. It is quick and roomy, with tremendous performance and is very practical – it deservedly wins out first 'Best Hybrid' award."

The XC90 T8 combines a powerful and efficient petrol engine with an electric motor. This offers a combined 407 hp and the reassurance of all-wheel drive, while the electric motor's instant torque is particularly useful when manoeuvring at low speeds. Unlike some hybrid vehicles that have a comparatively low towing limit, the T8 also has an impressive maximum braked towing limit of 2,400 kg, which is enough to tow even large loads safely and confidently.

Every XC90 comes with an eight-speed automatic gearbox and all-wheel drive as standard, along with hill start assist, hill descent control, satellite navigation with European mapping, and front and rear parking sensors. It also comes with automatic emergency braking – including pedestrian, cyclist and large animal detection – and the innovative Volvo On Call app, which allows you to control various functions of your car remotely. On top of this, the T8 version has an auxiliary fuel-fired heater with pre-conditioning functions, so you can cool or warm the cabin before you get in the car, along with a panoramic sunroof and four-zone climate control.

The XC90 T8 can travel for up to 27 miles in electric-only mode when you're not towing, and its batteries can be fully recharged in as little as two and a half hours.

Commenting on the award, Jon Wakefield, Managing Director of Volvo Car UK, said: "This award win just goes to show how versatile the XC90 T8 Twin Engine is. It is supremely spacious, luxurious and safe, not to mention its tax-efficiency and environmental capabilities – plus it's an excellent car for towing."

For more information on the Volvo XC90 T8, please go to www.volvocars.com/uk

Keywords:
Awards, XC90, 2016, Electrification, Powertrain
Descriptions and facts in this press material relate to Volvo Car UK's car range. Described features might be optional. All information is correct at time of going to press and may be altered without prior notification.
To view the full copyright information click here
Media Contacts
Related Images
Jun 14, 2017 ID: 209600 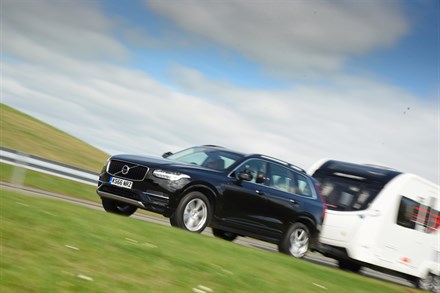