Volvo Car UK has strengthened its internal sales operations team, creating three new roles and making a series of appointments as it strides towards its growth target of selling 60,000 cars per year by 2020.

The move comes after 2016 saw Volvo secure its highest sales figures in the UK for a quarter of a century, up 7% year on year to 46,696 cars sold, and contributing to a third consecutive year of record sales for Volvo globally.

A newly created role of National Sales Process Performance Manager will be filled by Chris Francis, previously Regional Sales Development Manager for London and the South East. Using his in-depth knowledge of Volvo's systems and his proven track record of delivering strong sales improvement in his region over the past two years, Chris's new role will focus on identifying and implementing initiatives to drive sales performance across the retail network.

A new Sales Analyst role, supporting the sales operations team with market intelligence and data analysis, which will enable them to identify and respond to new opportunities more quickly, will be filled by Jake Quail, who has spent the past two years within the Marketing team, specialising in corporate sales.

Steve Martin joins Volvo Car UK from Renault, having previously worked for Honda and Jaguar Land Rover in the United Arab Emirates, where he spent five years developing sales in the region. Steve has been appointed Regional Sales Development Manager for the Midlands.

Having worked with the brand through Volvo Car Financial Services, Mark Slack will join the sales operations team as Regional Sales Development Manager for the South of England.

Matt Barker, previously Regional Sales Development Manager for the Midlands, will move to take on responsibility for the UK's largest region by volume, the North of England and North Wales. David Chesterman will move from South England to London and the South East.

An appointment is still to be made for Regional Sales Development Manager, responsible for the South West of England and South Wales.

Commenting on the development of the sales operations team, Matt Galvin, Head of Retail Sales, said: "2016 was a record-breaking year for Volvo sales, but with a wealth of new product coming over the next three years, our opportunity for further growth is clear. With a series of new appointments and the restructuring of our existing team, we have an internal sales team with the skills, experience and appetite to focus and support our retail network, ensuring the brand continues to go from strength to strength."

Keywords:
Corporate News, Product News
Descriptions and facts in this press material relate to Volvo Car UK's car range. Described features might be optional. All information is correct at time of going to press and may be altered without prior notification.
To view the full copyright information click here
Media Contacts
Related Images
Apr 03, 2017 ID: 207144 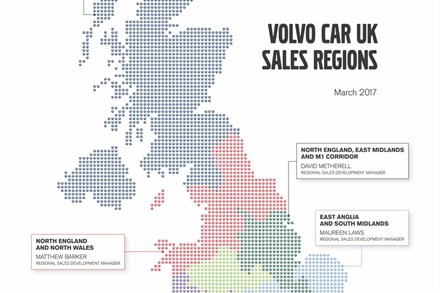