VOLVO IS ON THE CASE IN "MIDSOMER MURDERS"

VOLVO IS ON THE CASE IN "MIDSOMER MURDERS"

Volvo Car UK has joined Causton CID's leading crime-fighters in a mission to rid the fictional village of Midsomer of its murderous reputation.

Lead actor John Nettles drives a Magic Blue Volvo S80 D5 SE Lux, and his sidekick, played by Jason Hughes, can be seen behind the wheel of a Titanium Grey Pearl Volvo S40 D5 SE. Volvo also supplied a V70, which is used by the crew to film interior car scenes. Nettles has developed a soft spot for his Volvo S80, not only driving it on camera but also to and from the set, saying "it's a cool car, fast, fuel efficient and a delight to drive".

Peter Rask, managing director of Volvo Car UK, said: "It's great to be involved with such a popular and long-running series. It's been a perfect fit for Volvo and we seem to be car of choice for on screen law enforcement agencies."

Volvo has been the car of choice for TV detectives since the 1960s when Roger Moore (aka Simon Templar) got behind the wheel of a Volvo P1800 sports coupe in The Saint. While the 1997 Paramount motion picture of The Saint saw Val Kilmer driving a cherry red Volvo C70.

Keep your eyes peeled for the Volvo S80 and S40 in Midsomer Murders when the new series airs July 22nd on ITV1.

Keywords:
Special Interests, Sponsorship
Descriptions and facts in this press material relate to Volvo Car UK's car range. Described features might be optional. All information is correct at time of going to press and may be altered without prior notification.
Related Images
Jul 22, 2009 ID: 20373 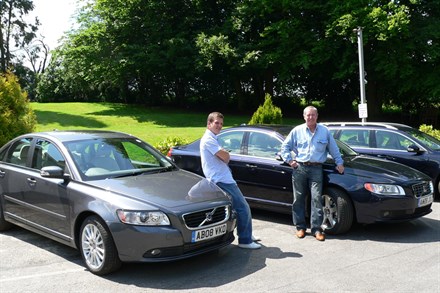