Volvo has been voted Tech Brand of the Year at the inaugural Car Tech Awards.

The new awards recognise the best in automotive technology, as voted for by the experts at Carbuyer, the car review and advice service, and technology website Alphr.com. Volvo was recognised for its ground-breaking technology, such as the pioneering Sensus touchscreen control system in its new large premium models, the S90, V90 and XC90. Its all-new Drive-E powertrains, designed to offer efficient power using a mixture of advanced injection technology and electrification, impressed the judges, too.

The company was also praised for its forward-thinking approach to technology partnerships, such as the collaboration with Uber, which will result in Volvo's sophisticated SPA platform underpinning Uber's next generation of autonomous-drive vehicles.

Stuart Milne, editor of Carbuyer, said: "For years, Volvo has been synonymous with safety, but it is now becoming a tech brand in its own right. It'll use autonomous technology to ensure no one is killed or seriously injured in a new Volvo by 2020 – a remarkable goal. It has used technology to downsize its engines with no impact on performance, and has delivered a market-leading infotainment system in Sensus. Yet it's still finding time to partner with Uber and bringing itself to the heart of Silicon Valley as a result. It's the blend of thinking about the technology of today as well as the tech of tomorrow that makes Volvo our Tech Brand of the Year.

Everything Volvo does is 'designed around you', which means that every piece of technology is as intuitive and user-friendly as possible. So not only are most of the XC90's functions controlled via its advanced Sensus touchscreen or the intelligent voice-control system (both of which are fitted as standard), you won't be baffled by whichever you choose to use.

The Bowers & Wilkins audio system sets new standards for the automotive industry. It combines the expertise of premium British hi-fi equipment company Bowers & Wilkins with cutting-edge sound processing software from Swedish audio company Dirac Research. The 18-speaker system produces a huge 1,400W, and can be tailored, at the touch of a button, to mirror the precise acoustics of the Gothenburg Concert Hall, a recording studio or a live stage environment.

Jon Bray, Reviews Editor at Alphr.com, said: "We were hugely impressed by the XC90's Bowers & Wilkins audio system that, while a significant investment for the buyer, betters systems costing far more. We also found Sensus to be a very effective tool to operate the car's many and varied functions."

Commenting on the awards, Jon Wakefield, Managing Director of Volvo Car UK, said: "These award wins recognise the fact that Volvo is a technological leader – not just in the field of safety, but in terms of connectivity and in-car entertainment, autonomous drive and efficient powertrains. They also show that no matter how sophisticated Volvos get, the way in which we interact with the technology needn't be complex."

For more information on the XC90 and the rest of the Volvo range, please go to www.volvocars.com/uk

Keywords:
Product News
Descriptions and facts in this press material relate to Volvo Car UK's car range. Described features might be optional. All information is correct at time of going to press and may be altered without prior notification.
To view the full copyright information click here
Media Contacts
Related Images
Mar 01, 2016 ID: 189887 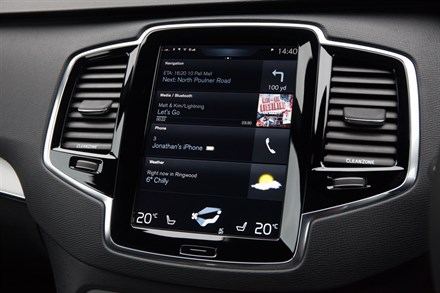