Volvo Car UK has today challenged the Mayor of London, Boris Johnson, to review the basis of charging for the London Congestion Charging zone.

Volvo Car UK believes that the principle of hybrid cars being exempt from the Congestion Charge is now outdated and unfair. Drivers of hybrid cars enter the zone free of charge on a daily basis while drivers of low emission cars powered by conventional internal combustion engines with the same, or even lower, levels of emissions are charged £8.00 per day.  This 'tax' could add a financial burden of over £2,000 per year to those drivers who have selected a traditionally-powered low emission car.

The apparent disparity was highlighted to Boris Johnson by Stuart Kerr, Regional President for Europe from Volvo Car Corporation when he collected the What Car? Green Car of the Year award from The Mayor recently.  This was followed up by a letter to The Mayor's office on 22 June (see Editor's Notes).

What Car? has also joined Stuart Kerr in the call for a review. What Car? editor, Steve Fowler, said "We'd welcome a review of the regulations that govern which cars are exempt from Congestion Charging. At the moment, there's confusion among car buyers and the car industry. Some cars that use conventional engine technology yet have very low CO2 figures aren't exempt, but hybrids with higher CO2 figures are! And with an increasing number of low CO2 vehicles, including diesel hybrids, plug-in hybrids, range extenders and electric vehicles, now is the ideal time to re-open the debate and we'd be delighted to be part of it."

Hybrid-powered cars have CO2 outputs ranging from 89g/km to 219g/km, yet all are exempt from the London Congestion Charge. Volvo's What Car? Green Car of the Year-winning S40 1.6D DRIVe with Start/Stop technology emits just 104g/km yet drivers are charged £8.00 to enter the capital. Similarly, Volvo's DRIVe C30 Sportscoupe and V50 Sportswagon models also emit 104g/km but none of them are exempt from the charge.

At the end of 2008, there were 13 non-hybrid cars from other manufacturers emitting less than 105g/km of CO2 on the market. Using the Society of Motor Manufacturer and Traders sales figures, this would equate to over 9,500 owners of low-emission cars that should, given a level playing field, be exempt from the London Congestion Charge. The number of conventionally-powered low emission cars will increase substantially throughout 2009, as will the number of affected owners.

Those affected are being encouraged to register their support at www.volvocars.co.uk/emissionsequality . They can also follow the cause on http://twitter.com/eequalityor befriend the campaign at www.facebook.com/pages/Emissions-Equality/119945287541

The following letter was sent to The Mayor of London, Boris Johnson on Monday 22 June 2009.

Thank you for your hospitality on Monday 8 June on the occasion of the What Car? Green Car of the Year awards.

I was sorry not to have had longer to elaborate on the thoughts contained in my acceptance speech.  In essence, it is Volvo's belief that, in its current structure, the London Congestion Charge unfairly benefits hybrid-powered cars at the expense of drivers choosing normal internal combustion-powered ones with similar levels of emissions.

It is clear that at the time of the inception of the Congestion Charge in 2003, hybrid cars offered the lowest levels of tail-pipe emissions and it therefore made sense to incentivise ownership of those lower-polluting hybrid cars to reduce CO2 emissions in London. It is, however, beyond doubt that the automotive industry has risen to the challenge and is constantly reducing tail-pipe CO2.  The Society of Motor Manufacturers and Traders (SMMT) suggest that the reduction was more than four per cent last year alone.  As a result, we now find ourselves in a situation where conventional cars can deliver equivalent, and in some cases, better levels of emissions than the hybrid cars that still receive an exemption from the charge.

The SMMT confirms that at the end of 2008, there were 13 non-hybrid models in the total UK car market that fell below the 105g/km threshold, being the same CO2 emissions as the most widely known hybrid-powered car, the Toyota Prius. This number will have increased substantially in 2009. Using the SMMT's sales data too, that would add up to more than 9,500 owners of low emission cars who should, given a level playing field, benefit from a zero-rate Congestion Charge when driving into London. Again, this number will have increased substantially in 2009.

To further underscore the apparent injustice, owners of the 192g/km-emitting Lexus RX400h hybrid car also benefit from free-of-charge Congestion Charge while drivers of the new Volvo XC60 2.4d model - a car of similar size to the Lexus but emitting just 159g/km of CO2 - aren't exempt.

I appreciate that the removal of the Congestion Charge for all low-emitting cars would have considerable financial implications for Transport for London but at Volvo, we believe in one rule for one, one rule for all.  With this in mind, I would be very grateful to hear your thoughts on this subject and understand what proposals you might consider putting forwards, not just for drivers of Volvo's What Car? Green Car of the Year, but for drivers of all low emission cars who are currently subject to the Congestion Charge.

I look forward to hearing from you.

Keywords:
Environment, Overview
Descriptions and facts in this press material relate to Volvo Car UK's car range. Described features might be optional. All information is correct at time of going to press and may be altered without prior notification.
Related Releases 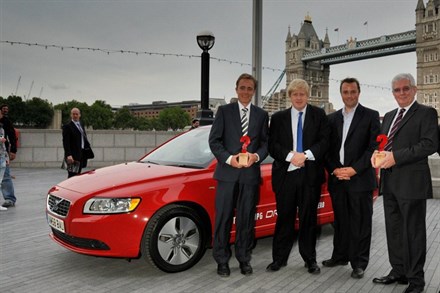