The Volvo V40 has today (19 July) been presented with the ‘Co-op Safe Used Car 2016’ award. The inaugural Co-op Insurance award celebrates the safest used cars typically bought by families in the UK.

Working in collaboration with safety experts Thatcham Research, Co-op Insurance awarded the trophy to the Volvo V40 with Driver Support Pack, which beat strong competition from the Volkswagen Golf and Nissan Qashqai to claim the title.

In order to be in the running for the award – which is the first to recognise safety in the UK used car market – all the cars had to have a five-star Euro NCAP crash test rating, CO2 emissions of 120 g/km or lower and be available to buy on the second-hand market for £15,000 or less. The cars were then evaluated further on their crash worthiness, which included ratings for adult, child and pedestrian protection, and the availability of Autonomous Emergency Braking (AEB).

The Volvo V40 received the top rating of five stars in its Euro NCAP crash test in 2012, and its overall scores are still the highest ever recorded by the safety assessment institute.

The V40 was one of the first cars to have AEB as standard. The system, known as City Safety, works at speeds of up to 31 mph and will automatically apply the brakes if it senses an impending crash to avoid the collision entirely or lessen its severity. The V40 was also the first car in the world to come with an airbag to help protect pedestrians in an accident.

James Hillon, Director of Products at Co-op Insurance, said: “At the Co-op, we are keen to help educate people not only about car safety, but about what they should be thinking about before they even set foot on a car forecourt.

“The Volvo V40 was awarded the accolade because it is a perfect example of a reasonably priced car that has a large number of safety features as standard, even on older models. It has a five-star Euro NCAP rating and provides good protection in a crash for the driver and front passenger, as well as children. Where it really shines, though, is in the standard of collision-avoidance technology available.”

Bruce Greenwood, Used Car Programme Manager for Volvo Car UK, said: “With renowned Volvo safety, quality and dependability, as well as the peace of mind you get when buying through the Volvo Selekt Approved Used Car programme, the Volvo V40 is an outstanding used family car choice.

“Volvo is committed to protecting drivers, passengers and pedestrians, and we are thrilled that the V40 has been recognised by Co-op Insurance as the first ever ‘Co-op Safe Used Car’.”

Included as standard on your Volvo V40 is City Safety, which senses potential collisions (active from 2 to 31mph) and can activate the brakes automatically should you not react in time.

The groundbreaking Pedestrian and Cyclist Detection technology with full auto brake detects and automatically brakes for cyclists swerving out in front of the car. The advanced sensor system scans the area ahead. If a cyclist heading in the same direction as the car suddenly swerves out in front of the car, as it approaches from behind, it will prompt you to act with a flashing warning light on the windscreen, along with an audible alarm. If you do not react to the warning, and a collision is imminent, the car immediately brakes with full braking force.

When engaged, adaptive cruise control makes driving the V40 even more relaxing, using radar to maintain a set distance to the car in front. As soon as a slower vehicle is detected, the car's speed will automatically adapt to match it, keeping you at a safe distance. The useful Queue Assist function (available on vehicles with automatic transmission) can keep the gap even in queues with repeated starting and stopping.

Forward-facing cameras on the V40 can help keep your car in the intended lane, gently steering the car back on course or alerting you through the steering wheel.

The radar based BLIS technology informs the driver about other vehicles in the blind spots on both sides of the car and also monitors and alerts drivers to rapidly approaching vehicles up to 70 metres behind the car. Cross Traffic Alert uses the radar sensors at the rear end of the vehicle to alert the driver to crossing traffic from the sides when reversing out of a parking space.

The V40 can also help you stay informed by displaying road sign information within your instrument display, including speed limit signs and "no overtaking" warnings. 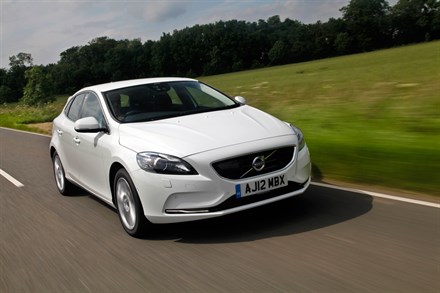 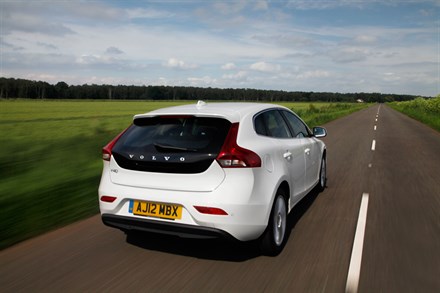