Professional kitesurfers – Steph and sons Olly (18) and Guy (16) Bridge – will take to the waters around the Isle of Wight this month in an attempt to beat the World Sailing Speed Record for the fastest time around the island; a record currently held by a large multihull, Foncia, with a time of 2 hours, 21 minutes and 25 seconds.

Racing around the island, reaching speeds of up to 30 knots, the three Team Volvo sailors will ride on hydrofoil kiteboards – boards fitted with large knife-like foils beneath them, designed to lift the rider clear above the water for increased speed. With unpredictable conditions, the three athletes will require three safety boats, a team of medical personnel and several kite handlers on hand to support them.

Steph Bridge, who is hoping to set a new record for the fastest female around the island, is excited to put her skills to the test. "It's 55 nautical miles around a treacherous bit of the coastline. Every decision out there is down to us – if we get any of those decisions wrong, we're going to suffer."

As a 'practice run', five-time World Kite Race Champion Steph Bridge and son Guy completed the course in 2015 stating the trial to be "much tougher than expected", but both are eager to beat the record in 2016.  Steph is no stranger to tough challenges. Having already raced across the English Channel with her friend Sir Richard Branson, Steph successfully set a Guinness World Record in 2012. Her sons, Olly and Guy, are as adrenaline fuelled as their mother, competing internationally and holding multiple championship titles between them. At present, Guy is the 2015 British Hydrofoil Champion; older brother Olly is the Vice World and European Race Champion.

As competitive as they are daring, the boys are up against each other in this challenge – only one of them will claim the title of 'Fastest man around the Isle of Wight'. "It's a tough one to call," said Guy, raring to go. "Not only is this one of the most difficult things I've ever done, I'm up against one of the world's best kitesurfers who just so happens to be my brother. We both have our own strengths and weaknesses, though – there's no safe bet on this one."

The trio has the support of premium Swedish car brand Volvo Car UK – a sponsor of Team Bridge since 2013.

"The Bridge family epitomise the sense of adventure inherent in Volvo's Swedish roots – the desire to get outside and take on the elements," said Nikki Rooke, Head of Corporate Communications, Events and Sponsorship at Volvo Car UK. "This is a big challenge for all three to undertake and I wish them the best of luck. I'm confident all their training and preparation will pay off."

The kitesurfing challenge will take place between 29 June and 1 July, with the weather being the deciding factor for the final date of the record attempts.

* Team Volvo is the collective name given to the 34 professional athletes sponsored by Volvo Car UK. The team includes members of the British Sailing Team as well as a family of professional kitesurfers (Team Bridge) and Volvo Ocean Race sailors. 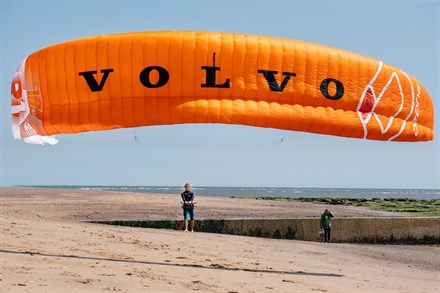