Volvo is celebrating after bucking national trends and beating the downturn with rising sales of its new cars during 2008. According to figures released by the Society of Motor Manufacturers and Traders (SMMT), Volvo enjoyed a sales increase of 10.98% in comparison to 2007. Market share in the UK was also up 25% on the previous year - rising from 1.25% to 1.56%. This strong end to the year has also been carried over in the early days of 2009 with sales up 16 per cent compared to the same period last year.

Volvo sold a total of 33,358 cars during 2008 and was one of only nine manufacturers on the 52-strong SMMT list to have experienced positive sales growth. The results are in marked contrast to the new car market as a whole, which experienced an overall drop of 11.32% in 2008 - equivalent to 272,212 fewer cars sold to UK customers.

Sales of the Volvo C30 SportsCoupe rose by 27.6% thanks, in part, to the launch of the sports inspired R-DESIGN specification. The Volvo S40 and V50 also benefited from the introduction of the R-DESIGN specification and they enjoyed even greater success, with increases of 39.4% and 68.8% respectively. The versatile Volvo V70 premium estate also bucked national trends with sales rising by 9.6% in its segment.

"The introduction of the R-DESIGN package on C30, S40 and V50 models has also played a major role in attracting new customers to the brand, while used car experts CAP say it's also had a positive effect on residual values too, further increasing the cars' desirability at a time of economic uncertainty."

The model realignment also delivered success in the fleet sector, where the popular S40 and V50 models contributed to sustained increases in company car sales - including a 33% surge in sales to end-user fleet and leasing companies.

John Wallace, Volvo Corporate Sales and Leasing Manager, said: "Particular success has come from a revised strategic approach to the growing SME market and the Public Sector, which included replacing the free fleet service plan with alternative offers better suited to the leasing companies which service these customers.

"And with the executive S80 saloon and V70 estate now available with 2.0D engines whose emissions are below the all-important 160 g/km CO2 threshold, Volvo has a cost-effective product-range for both fleet managers and user chooser drivers at all levels of the company car hierarchy."

Volvo is hoping to build on this success in 2009 with the help of its economical new DRIVe range of vehicles.

DRIVe variants are available on C30 SportsCoupe, S40 Saloon and V50 Sportswagon models, all of which are fitted with the 1.6-litre diesel engine and are capable of returning more than 62mpg on the combined fuel economy cycle. Meanwhile, emissions of just 118g/km in the S40 and V50 and 115g/km in the C30 mean they also qualify for Band B road tax at £35 per year. Company car users who choose an S40 or V50 DRIVe can enjoy big car comfort with low Benefit In Kind (BIK) tax bills.

Keywords:
Sales Volumes, Overview
Descriptions and facts in this press material relate to Volvo Car UK's car range. Described features might be optional. All information is correct at time of going to press and may be altered without prior notification.
Related Images
Dec 09, 2008 ID: 18298 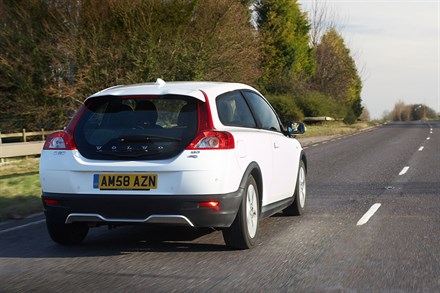