Performance, CO2 emissions and fuel consumption for the Volvo DRIVe models are as follows:

The new C30, S40 and V50 1.6D DRIVe models without Start/Stop all boast CO2 emissions of just 119 g/km, enabling customers to benefit from the low £35 per year tax band. The fuel consumption has also been improved and offers up to 62.8 mpg on the combined cycle across all three models. The reduction in fuel consumption and CO2 emissions was brought about by meticulously analysing the cars' total potential for more efficient, economical driving.

All DRIVe models benefit from a lowered chassis - ride height on all three models has been dropped by 10mm. This lower ground clearance reduces fuel consumption at the same time as lowering the centre of gravity that, consequentially, has a positive effect on the car's handling. Front airflow deflectors have also been moulded into the body ahead of the front wheels to help channel airflow and a lower, front lip spoiler has been added.

Road wheel design was another area of development and drag has been cut with the adoption of a new, flush-style 16-inch diameter alloy wheel dubbed the Diamond Cut Libra (optional upgrade to alternative alloys available). As for tyres, Volvo worked closely with Michelin to develop a compound with uncompromising handling and wear characteristics coupled with low rolling resistance.

Further economy benefits were made by optimising engine and gearbox management software and introducing electrohydraulic steering. There is also a Gear Shift Indicator that informs the driver of the optimum time to change gears and achieve better fuel consumption. The final ingredient is a low friction transmission oil used in the gearbox. Individually, the modifications may seem small, but when combined, they produce a dramatic effect on overall efficiency.

The DRIVe enhancements are available across all trim levels including the sports-inspired R-DESIGN specification to offer low levels of emissions and the highest levels of visual appeal. The changes detailed above enable the cars to keep the full R-DESIGN bodykit including front and rear spoilers, lower door trim and side skirts as well as roof and lip spoilers and 17-inch five spoke alloy wheels. The interior also carries all the familiar R-DESIGN features such as upholstery in cream leather and off-black Flex-Tec, R-DESIGN centre stack and blue instrument dials.

In order to reduce CO2 emissions to 104 g/km and improve fuel economy up to 72.4 mpg in the S40 and V50 1.6D DRIVe models and 99 g/km and up to 74.3 mpg for the C30 1.6D DRIVe, these three models are also available with further efficiency enhancing features. One of which is an intelligent Start/Stop function that allows the engine to switch off when the car is at a standstill.

The Volvo C30, S40 and V50 1.6D DRIVe with Start/Stop all feature the same modifications as the standard 1.6D DRIVe cars, but they also benefit from a covered grille.  In addition, the C30 further benefits from a rear diffuser, DRIVe rear spoiler and underbody panels for improved aerodynamics.

These DRIVe models have also been equipped with two intelligent new features. The first is a Start/Stop function that allows the engine to switch off when the car is at a standstill.

When the driver puts the gear lever into neutral and releases the clutch while at a standstill, the engine switches off. The next time the driver presses the clutch, the engine starts up again. This technology has reduced fuel consumption and thus CO2 emissions by four-to-five per cent in mixed driving conditions. Start/Stop technology is particularly effective in urban traffic, when the saving can be as much as eight per cent.

When the car is at a standstill and the engine is switched off, some electronic systems such as the air conditioning step down to standby level in order to save fuel. However, Volvo's Start/Stop system continuously monitors the comfort level and automatically reactivates the air conditioning if, for instance, the temperature increases in the passenger compartment. The system does not set any limits for comfort-focused features such as the sound system or other facilities that the occupants will want to maintain.

This innovative monitoring system has been made possible due to an additional small battery which supports the larger battery by providing extra power. Thanks to this extra battery, Volvo's DRIVe models also feature particularly quick and smooth start-up. The audio system also remains unaffected when the starter motor is activated. This distinguishes Volvo Car's solution from other systems offered by the competition. The standard larger battery has also been upgraded to handle up to 175,000 Start/Stop cycles.

The driver continuously receives feedback about system status via the in-car information display. The Start/Stop function can be engaged and disengaged via a DRIVe button in the centre console and in the default setting, the function is activated.

The second new feature in the C30, S40 and V50 DRIVe 1.6D with Start/Stop is a regenerative charge facility. This charges the battery as soon as the driver releases the accelerator or brakes while a gear is engaged. By harnessing the car's kinetic energy, the alternator does not have to use diesel fuel as a power source to recharge the car's battery. Fuel savings of between two and three per cent have been achieved with this function.

The introduction of front-wheel drive and the new 2.4D engine to the XC60 crossover and XC70 premium estate will see CO2 figures tumble to 159 g/km and fuel economy improve to 47.1 mpg. This will mean the XC60 will be the first premium Crossover falling below the all-important 160 g/km Writing Down Allowance threshold for company cars, making the award-winning XC60 an attractive choice for the Fleet Manager. Company car drivers will also benefit significantly from lower Benefit-in-Kind taxation bills.

In addition to front-wheel drive, a number of improvements all help deliver the new model's competitive fuel consumption and CO2 figures. Volvo Cars' engine experts have also succeeded in reducing friction and pump losses in the diesel engine and in cutting the pressure drop in the intake and exhaust systems.

The gear ratios have also been optimised so the car can be driven economically. For instance, when driving at 62 mph in top gear, engine revs and thus also fuel consumption are significantly lower with the new powertrain.

One important part of the development brief was to retain the sporty driving properties. More horsepower, higher torque and a sporty chassis setting all help give the front-wheel drive version of the XC60 and XC70 the right driving dynamics.

The Volvo V70 and S80 DRIVe models will come equipped with the same powertrain - 1.6-litre diesel engine and manual gearbox - as the smaller C30, S40 and V50 but with specially tailored engine software and different ratios in third, fourth and fifth gears. Volvo V70 and S80 DRIVe models are available to order now, but production does not start until the end of August 2009.

The optimised powertrain is a major aid in helping Volvo's larger cars significantly cut their fuel consumption and CO2 emissions to achieve up to 57.7 mpg and 129 g/km respectively.

Several other factors also contribute to the reduction in fuel consumption, for example the tyres that have been specially designed for low rolling resistance. The V70 and S80 DRIVe versions are also equipped with an electric power steering pump that delivers exactly the servo assistance the driver requires, in a precise and energy-efficient way. All DRIVe models feature this power steering system. The V70 also features a covered grille to aid aerodynamics and a lowered chassis (20 mm front, 15 mm rear). 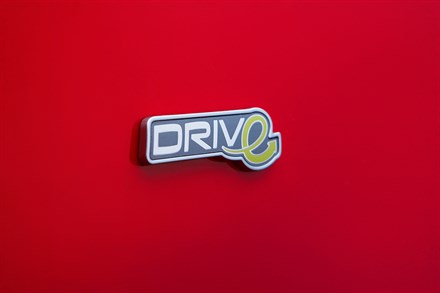 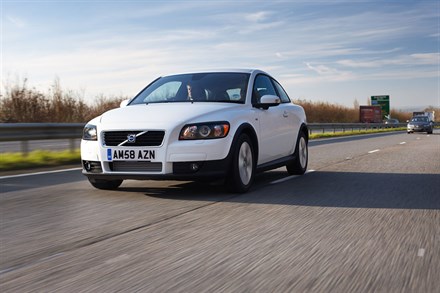