Together with the introduction of three fuel-efficient DRIVe cars with CO2 emissions below 120 g/km1, Volvo Cars is unveiling an aggressive roadmap for cutting CO2 emissions. The aim is to have DRIVe models with emissions of about 100 g/km within a few years, while an innovative micro-hybrid will be introduced in 2011, followed a year later by a diesel hybrid.

"Environmental focus is naturally a high priority. Along with work on a diesel hybrid, we are conducting intensive research to cut CO2 emissions throughout the driveline range. Within a couple of years we will have cars with emissions below 100 g/km," says Volvo Cars CEO and President Stephen Odell.

The systematic measures to reach this goal mean optimising both the drivelines and components on the car itself, for instance, aerodynamics and rolling resistance.

"All these measures offer huge potential and we will achieve significant results during the coming three-year period," says Stephen Odell.

Early 2011 will see the introduction of the micro-hybrid. Volvo Cars' innovative micro-hybrid has a start-stop function that goes further than just switching off the combustion engine when the vehicle is at a standstill.

The micro-hybrid offers several benefits compared with other manufacturers' solutions. Firstly, it can be used in combination with both a manual and automatic transmission. Plus, the gearlever doesn't need to be in neutral as the technology monitors the car whilst driving and identifies when the engine can be switched off and switches the engine off automatically. It also provides the driver with the additional flexibility to restart the engine immediately, even if the car has not yet come to a complete standstill, by simply pressing the accelerator. This situation could occur when approaching and joining a roundabout where power is required instantly to take advantage of a gap in the traffic.

When it comes to petrol engines, in 2009 Volvo Cars will start introducing a new generation of four-cylinder turbocharged engines with direct injection, a technology known as GTDi (Gas Turbo Direct injection).

Volvo Cars is also developing a diesel hybrid where the front wheels are driven by a further-developed variant of Volvo's five-cylinder D5 turbodiesel, while the rear wheels get a separate electric motor.

Cooperation between these two power sources and the distribution of power between the two pairs of wheels are electronically controlled to provide both effective four-wheel drive and the lowest possible fuel consumption in different driving scenarios. This diesel engine in the hybrid system also comes with a start-stop function that switches off the engine when the car is at a standstill.

"The diesel hybrid is a highly interesting solution since it is based on a sophisticated combination of the already energy-efficient diesel and electronics. Unlike a petrol hybrid, our solution will offer considerable environmental benefits both in city driving and when out on the open road," says Stephen Odell.

The next step is a plug-in hybrid, which is scheduled to come after 2012. The battery pack in a plug-in hybrid is recharged overnight via a regular household power socket and this gives the car an operating range of about 62 miles on electric power alone. If necessary, the car's combustion engine starts up to recharge the batteries while driving1.

Keywords:
Environment, Motor Shows
Descriptions and facts in this press material relate to Volvo Car UK's car range. Described features might be optional. All information is correct at time of going to press and may be altered without prior notification.
Related Images
Sep 09, 2008 ID: 16756 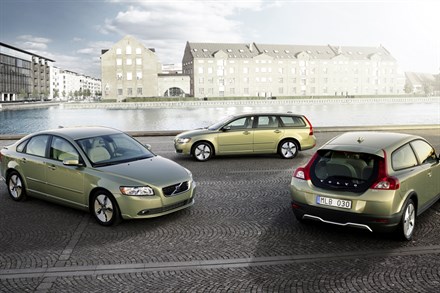