Volvo’s first ever petrol plug-in hybrid, the XC90 T8 Twin Engine, has qualified for the UK Plug-in Car Grant (PICG) scheme from the Office of Low Emissions (OLEV). The new XC90 T8 Twin engine is now available with an on-road price of £54,955 (including PICG).

The SPA platform is designed to incorporate electrification without encroaching on interior space, with the necessary battery pack being neatly concealed within the centre console. The Drive-E powertrain, from its initial concept, was designed to include electrification, with the new XC90 utilising both a 320hp petrol engine and 87hp electric motor.

With a combined output of 407hp, this 7-seat SUV emits an impressively low figure of just 49g/km of CO2, at the same time being able to go from stand still to 60mph in only 5.3 seconds.

The Plug in Car Grant (PICG) has a designed criteria to encourage manufactures to decrease the level of outputted CO2 exhaust emissions. To achieve this, hybrid vehicles must emit less than 75g/km, a minimal travelling range of 10 miles and must reach a speed of at least 60mph.

Companies choosing the XC90 T8 Twin Engine can benefit by writing down as much as 100% of the cost against their income tax liability. Driver who choose the XC90 T8 Momentum pay as little as £99.83 BIK a month (40% tax payer) whilst enjoying a full 7-seat SUV with 407hp.

The XC90 T8 is available in three designs: Momentum, R-Design and Inscription.

Keywords:
Product News
Descriptions and facts in this press material relate to Volvo Car UK's car range. Described features might be optional. All information is correct at time of going to press and may be altered without prior notification.
To view the full copyright information click here
Related Images
Jul 09, 2015 ID: 165868 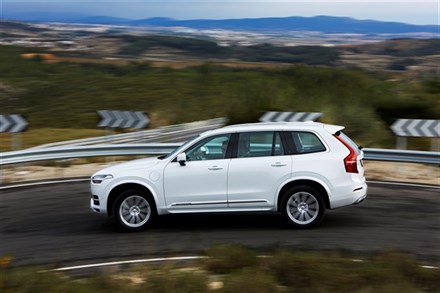