The XC90 T8 Twin Engine has exceeded all expectations when it comes to the no compromise equation of power and low fuel consumption, coupled with world class low emissions – and all in a 7-seat luxury SUV.

The improvement over the earlier announced figures were achieved thanks to the continuous innovation cycle at the Swedish company. The result of further tuning is a drop of 10 g/km from the initial prognosis, for up to 134.5mpg fuel economy, while also adding horsepower. This makes the XC90 T8 Twin Engine the clear leader in its segment, with an exceptional combination of low fuel consumption, emissions and pure power.

“We have been working hard to earn our competitive edge and to give our customers the ultimate combination of performance and low fuel consumption. Our Twin Engine technology has enabled us to build on our heritage of efficient powertrain development in a completely new way. Thanks to our new scalable product architecture, and our world class four-cylinder engines, we have a clear and leading position,” said Dr Peter Mertens, Senior Vice President Research & Development at Volvo Car Group.

No other SUV in this class can deliver 26 miles of pure electric range, 0-62mph in 5.6 seconds and provide combined power of 407 hp – all in a 7 seat configuration.

The XC90 T8 Twin Engine is available to order in the UK now. First deliveries will be at the end of the year.

All figures are based on the NEDC driving cycle for hybrids.

The XC90 T8 Twin Engine can go from 0 to 62mph in 5.6 seconds, delivering all the driving pleasure customers have come to expect from a Volvo SUV. But driving pleasure is only a fraction of what the XC90 T8 offers: the car has five different driving modes that deliver a range of performance and efficiency-enhancing characteristics. Using either a scroll wheel on the centre console or a touchscreen on the dashboard, drivers can choose from:

Pure electric: In this mode, when the high-voltage battery is fully charged, it serves as the car’s sole energy source, powering the electric motor over the rear axle. The XC90 T8 has a range of up to 26 miles using just electricity, which covers the total distance many people drive in one day. And thanks to the regenerative braking system, this mode is super-efficient in the stop-and-go traffic of city environments. If more power is needed, the Drive-E combustion engine starts up automatically.

Keywords:
XC90, 2016, Product News
Descriptions and facts in this press material relate to Volvo Car UK's car range. Described features might be optional. All information is correct at time of going to press and may be altered without prior notification.
To view the full copyright information click here
Related Images
Feb 12, 2015 ID: 157807 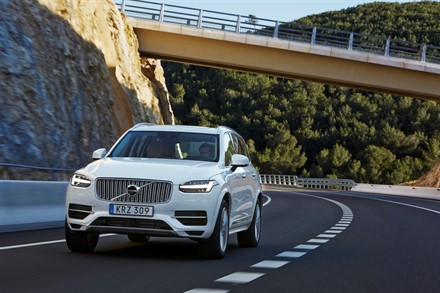