21 June the race will be in Copenhagen

This summer, Volvo Cars is highlighting an entirely new sailing concept in Scandinavia called Volvo City Sailing. The event is aimed at both beginners and experienced sailing enthusiasts. On 21st June the competition can be watched in Copenhagen, in August Gothenburg and Oslo. In September Helsinki will host the race.

"It's an exciting Volvo Ocean Race in miniature designed to be both simple and enjoyable for the participants. We naturally hope it will attract a large public following," says Bengt Magnusson, project manager at Volvo Cars Sweden.

With Volvo City Sailing, the company is aiming at the wider public in the sailing fraternity, offering a variety of activities featuring well-known artists, hands-on events, festival areas and the chance to test drive the latest Volvo models.

"Volvo City Sailing is a concept that we have started in Sweden as well as a few other places in Scandinavia. If the project is successful, we will expand it to additional markets. Our aim is that the competition should gradually grow into one of the world's largest sailing competitions in terms of the number of participants," says Johan Bexell, sponsorship director at Volvo Cars.

The competition is being organised in cooperation with the Swedish Sailing Federation and the Swedish Sea Rescue Society and will be held at weekends in 10 locations in Sweden and Scandinavia. At every location, the competition will encompass a total of 9 sailing events, with each heat lasting about 20 minutes. There will be qualifying rounds, semi-finals and a final. The first competition took place in Norrköping on May 10. The winner from each location will proceed to the grand final in Båstad on September 24-28.

At the events are also the music artists performing. The two bands September and Vincent are performing at 5 occaisions each.

In Copenhagen on June 21, the Swedish band Vincent (with Vincent Pontare) will perform.

The event starts at 9.30, in the Tuborg Harbour.

The winning crew in the Volvo City Sailing competition will compete for the prestigious Champion of Champions award together with all the other Swedish winners.

The winning team in the Volvo City Sailing competition will also get a trip to one of the Volvo Ocean Race stopover ports.

The Swedish Sea Rescue Society will be on hand at each location to take responsibility for safety and through rescue displays demonstrate its skills in its various areas of expertise.

Keywords:
Special Interests, Sponsorship
Descriptions and facts in this press material relate to Volvo Car UK's car range. Described features might be optional. All information is correct at time of going to press and may be altered without prior notification.
Related Images
Jun 20, 2008 ID: 15830 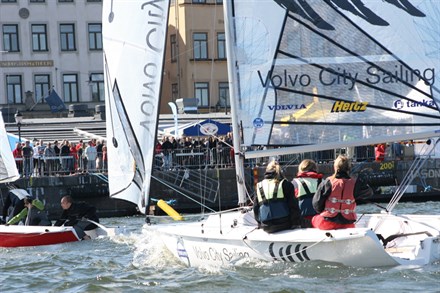