After 12 years on sale and more than 54,000 UK owners, the current Volvo XC90 continues to reaffirm its legendary status with yet another award win.

Judges praised the car’s refinement, design and practicality, together with its value for money as a used vehicle for the nation’s families.

Alex Newby, Associate Editor at What Car?, said: “The XC90 is the only non-MPV you can get which will fit three child seats in a row. That makes it fantastically attractive to anybody who has a larger family but frankly doesn't want the image that comes with an MPV or similar car. It's also fantastic quality and it does very well for safety; it's got an excellent number of features.

Fellow judge Nigel Donnelly added: “It's a family car par excellence. It's got seven seats, it's very safe, it's reliable, and it's cracking value as a used buy.”

The award comes just weeks after the car’s successor was revealed to the world. Indeed, such is the anticipation among customers for the forthcoming replacement, a special First Edition of the new car, available for online purchase only to 1,927 customers, proved so successful it sold out in just 47 hours.

Bruce Greenwood, Used Car Programme Manager at Volvo Car UK, said: “The first XC90 proved a runaway success for us here in the UK – and a 12-year lifecycle, with sustained sales success throughout that period, is proof of just how well the car was designed.

“On the evidence of the recent First Edition launch, it seems the new model is attracting just as much attention and is hotly anticipated so we look forward to attracting more new customers to the Volvo brand in the coming years.” 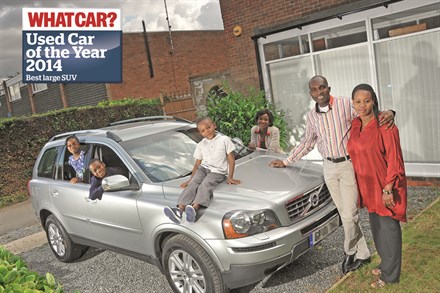