Ask Steve Mattin to describe the new Volvo XC60 and the Volvo Cars Design Director will unhesitatingly deliver a distinctive answer. "The boldest crossover so far. This car is charged with more emotive form and far more energy than any previous Volvo model," he says.

Steve Mattin and his team have designed the XC60 with a firm eye on a very clearly defined goal.

"We're elevating our design DNA to an entirely new level by literally turning up the visual volume. If you say that you'd recognise a Volvo from a hundred metres away today, I'd say the XC60 radiates a clear Volvo presence from at least twice that distance," says Mattin and adds:

"Traditionally, Volvo's interpretation of DNA signified ‘Do Not Abandon' the design traditions. We have now expanded its significance to also include the more exciting ‘Dramatic New Approach'".

As this car segment's name so clearly reveals, Volvo Cars' new crossover is spiced with the very best from two car types.

Down below, the unmistakeable, capable XC muscles are pumped up, creating a strong athletic body that is mated with high ground clearance and large wheels. Up above, the flowing lines create the sporty charisma of a coupe.

"The XC60 is much more emotionally charged than most of its competitors in the segment. It is seductive and packed with thrilling contrasts. Sleek yet muscular at the same time. Powerful yet agile. Large yet at the same time compact. The XC60 is actually 20 centimetres shorter than the XC70," explains Steve Mattin.

At the front the enlarged iron mark in the trapezoidal grille swiftly fills the rear-view mirror of the car in front - a distinct signal that Volvo's extrovert future has arrived.

"The classic iron mark now gets the role it deserves. Not discreet and modest, but bold and packed with self-confidence. It is precisely this attitude that Volvo's brand name should have," says Steve Mattin.

The XC60 previews Volvo's new face, with attitude and strength. Full of expression, personality and self confidence.

The frowning contours of the headlamps and the taut rearward flow of the front wings emphasise the bonnet's classic V-profile, giving the front an eager, wedge-shaped stance. This DNA ingredient is further strengthened by the newly incorporated unique DNA lamps. They characterize the front of the vehicle, flanking the grill and emphasising the V-shape and vertical stance of the XC60's front end.

"The expression ‘the eyes are the mirror of the soul' is an excellent description of the headlamps' role. The eyes reveal more about your personality than any other facial expression does," explains Steve Mattin.

The sculpted, seductive lines are particularly clear when the XC60 is viewed from the side. The car's shoulders are exceptionally broad. Towards the front they are strengthened by an underlining sculptural undercut, and when it comes to the rear wings Steve Mattin resorts to the sensually loaded adjective "voluptuous".

The large wheels, the bold wheel arches and the darker livery of the body's lower section further enhance the muscular XC feel, while the dynamic, flowing lines of the XC60's greenhouse combined with its daring roof contour impart a sporty coupe feel to the upper part of the car.

At the rear the muscular shoulders are emphasised by the characteristic LED lights set into the tail lamps. For the first time ever in a Volvo, the rear position lights also double up as brake lights, which means that the entire shape of the shoulder lights up when braking, giving the XC60 an even stronger more distinctive look.

The third brake light becomes a sculptural part of the roof spoiler. On the tailgate, the Volvo word mark now appears in bolder, more widely spaced letters. To even further strengthen its cross-over character the XC60 is available with a scuff plate for the rocker panel and with front and rear skid-plates that are integrated into the bumpers.

"Another new feature is that the roof rails have for the first time been integrated into the roof. This gives the car an unusually low and broad stance for a crossover," says Steve Mattin.

Interior that puts the driver in focus

The new XC60 is packed with energy on the inside too. All the occupants sit comfortably in the newly designed seats, but it is obvious that it is the driver who is in firm focus. The by-now characteristic slim centre stack is of a fresh design with a new integrated monitor screen layout and is angled slightly towards the driver.

"You should feel like a pilot at the controls of a business jet, with all your passengers sitting in First Class. You are seated in comfort, surrounded by ergonomically designed instruments and you really feel that you are on top of the traffic situation around you. The XC60 has more intelligent safety systems than any previous Volvo. That's why I want the entire driver's environment to radiate a high-tech feel," relates Jonathan Disley, head of interior design for the new Volvo XC60.

The interior too has been designed so every detail looks like it's in motion. Jonathan Disley and his team have created this sense of energy by blending together a theme that can be called "thick-to-thin" which adds drama and excitement.

"The recurrent asymmetrical look gives the interior a self-assured attitude, brimming with self-confidence. This feeling is reinforced by the well thought-out mix of contrasting materials, such as soft, warm, dark panels and hard, cold aluminium inserts," explains Jonathan Disley.

The stitched seams of the unique, sculpted XC60 seats have a pronounced X-theme.

"Cross Country, Cross City or Cross Over. Choose for yourself which interpretation suits you best," says Jonathan Disley.

The curvature of the forward edge of the rear seat cushion has been designed for easier entry and exit. The rear seat is also somewhat higher than the front seats to give its occupants a better view. The two outer seats can of course be specified with the same two-stage child booster cushions that were introduced in the Volvo V70 and XC70 in 2007. The seats are available in a wide variety of colours and materials.

"Choosing colour and trim is about expressing your personality, so we have developed a rich palate of attributes that customers with a taste for individuality can choose from," explains Anders Sachs, programme chief designer colour and trim for the XC60.

The colour and trim range includes a number of contrasting combinations and the highlight colour for the XC60 is a new shade of green: Lemon Green.

"This colour is designed to be seen. It has lots of attitude. The unique asymmetrical centre console with its silver frost frame is in brushed aluminium but it is also available in two wood alternatives, one high gloss and one matt wood finish, emphasizing the authenticity of the material and our Scandinavian heritage," says Anders Sachs. For the exterior, there are two new effect colours: Terra Bronze and Lime Grass Green.

Irrespective of whether the customer chooses a sober black interior or spices it up with Lemon Green, the overall impression is one of space and light - thanks largely to the new laminated glass panorama roof.

The load opening is the widest in the segment and the luggage compartment swallows 480 litres. As in the V70 and XC70, the rear seat is a three-piece 40/20/40 split/fold unit. Each section folds down easily to create a totally flat luggage platform for maximum flexibility.

The world-class audio system is part of the First Class experience inside the new XC60. It comes in three levels. The highest level, Premium Sound, features 12 Dynaudio loudspeakers and an amplifier with Dolby® Pro Logic® II Surround delivering 5x130 Watt. An optional digital subwoofer under the floor in the load compartment provides an additional 260 Watts.

The sound can be optimised to suit three different situations - driver's seat, both front seats or rear seat. The two highest levels of the audio system enable MP3 and WMA-format CDs to be played, which means that the CD changer can store several hundred tracks. All audio levels provide an auxiliary (AUX) input for connecting the owner's own equipment, such as a portable MP3 player. A USB port (on the two highest levels) makes it possible to plug in an iPod, MP3 player or USB.

In order to give allergy sufferers an even better in-car climate, the new Volvo XC60 can be equipped with Clean Zone Interior, a system that is based on ECC (Electronic Climate Control) and IAQS (Interior Air Quality System).

When the car is unlocked with the remote control, the passenger compartment is automatically ventilated for about a minute if the outdoor temperature is above 10 degrees Celsius. Clean Zone Interior has been recommended by the Swedish Asthma and Allergy Association.

The interior trim materials and other details have been selected to give off minimum levels of dangerous substances.

The new XC60 is also the first Volvo that meets the forthcoming European Union standard for type approval regarding reusability, recyclability and recoverability.

All told, the Volvo XC60 points the way towards Volvo Cars' future.

"In order to be perceived as premium, we have to dare to be seen clearly. Turning up the cars' visual volume has been one of my biggest goals since I came here to Volvo and with the XC60 we have taken a major step forward. This is a Volvo the way I want it to be. A Volvo for myself, if you like," concludes Steve Mattin.

Descriptions and facts in this press material relate to Volvo Cars' international car range. Described features might be optional.

Vehicle specifications may vary from one country to another and may be altered without prior notification.

Keywords:
Volvo XC60, Motor Shows, Design, 2009
Descriptions and facts in this press material relate to Volvo Car UK's car range. Described features might be optional. All information is correct at time of going to press and may be altered without prior notification.
Related Images
Mar 04, 2008 ID: 14582 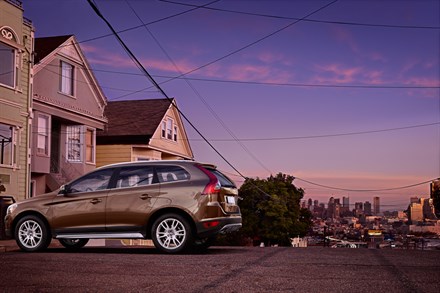