The Volvo ReCharge Concept is a plug-in hybrid with individual electric wheel motors and batteries that can be recharged via a regular electrical outlet for maximum environmental benefit.
Recharging allows the car to be driven about 60 miles (100 km) on battery power alone before the car's four-cylinder diesel engine is needed to power the car and recharge the battery.

"A certain proportion of electrical vehicles will be necessary to meet the CO2 emission demands of the future. Since the Volvo ReCharge Concept combines an excellent battery range with a backup combustion engine, it is a very interesting concept," says Magnus Jonsson, Senior Vice President Research and Development at Volvo Cars. He adds:
"The ReCharge Concept that we presented in Frankfurt a few months ago had a Bioethanol engine.  The concept offers unprecedented flexibility to meet future challenges.  By showing the car with a diesel engine, we demonstrate that the combustion engine for the generator can be matched to the preferences of each market. The diesel engine is one of the most energy efficient alternative available today ".
The ReCharge Concept has been developed at the Volvo Monitoring and Concept Center (VMCC), the Volvo Car Corporation's think-tank in Camarillo, California.
"This is a ground-breaking innovation for sustainable transportation. A person driving less than 60 miles a day will rarely need to visit a filling station. In the USA, this may apply to almost 80 percent of drivers," says Magnus Jonsson.
Thanks to the excellent electrical range from a fuel consumption angle, the Volvo ReCharge Concept is exceptionally kind to the car owner's wallet.
When driving on electric power only, operating costs are expected to be about 80 percent lower than that of a comparable petrol-powered car.

"This plug-in hybrid car, when used as intended, should have about 66 percent lower emissions
of carbon dioxide compared with the best hybrid cars available on the market today.
Emissions may be even lower if most of the electricity in intended markets comes from
CO2-friendly sources such as biogas, hydropower and nuclear power," says Magnus Jonsson.

An electric motor at each wheel
The Volvo ReCharge Concept shown in Detroit combines a number of the latest technological innovations into a so-called "series hybrid" where there is no mechanical connection between
the engine and the wheels.

Electric car with a combustion engine as backup
In principle, the Volvo ReCharge Concept is a battery electric car with an efficient generator,
an Auxiliary Power Unit (APU), that steps in when battery charge becomes insufficient for adequate driving performance.
The APU is designed to distribute electrical power to the individual motors at each wheel.
Since the combustion engine only powers the APU, it can operate in an optimal fashion, both for regulated emissions and CO2.
The APU is sufficiently powerful to supply an entire villa with electricity. For example it could with minor modifications in principle give the car owner an electricity generator right at his front door in
the event of a power failure.

The driver can choose the power source
The combustion engine starts up automatically when 70 percent of the battery power has been used up. However, the driver also has the option of controlling the four-cylinder diesel engine manually via a button in the instrument panel.
This allows the driver to start the engine earlier in order to maximize battery charge, for instance when out on the highway in order to save battery capacity for driving through the next town.
"There is a considerable difference between our plug-in hybrid and today's hybrids. Today's hybrids use the battery only for short periods to assist the combustion engine. Our solution is designed for most people to run on electric power all the time, while providing the extra security that comes with having a combustion engine as a secondary source of electrical power," says Ichiro Sugioka, project manager for the Volvo ReCharge Concept. He adds: "What is more,
our C30 with plug-in hybrid technology retains its lively and sporty driving properties.
Acceleration from 0-60 mph takes 9 seconds and top speed is 100 mph."

Specially developed electric motors
The central electrical components in the Volvo ReCharge Concept demonstrator - the generator for the APU and the wheel motors - were developed together with British electromagnetic specialists PML Flightlink.
With an individual electric motor at each wheel, weight distribution as well as mechanical efficiency and traction are maximized. The friction in mechanical gears is eliminated. Since the car does not have the transmission found in ordinary cars, there is no need for a gear lever.
To help maximize the environmental benefits, the Volvo ReCharge Concept has high-efficiency tyres developed by Michelin. They are specially designed to accommodate the wheel motors.
Further more, the car has All Wheel Drive in the truest sense of the term. Power to each wheel is controlled individually.
The energy that is generated during braking is transmitted to the battery pack. When the system is ultimately developed, traditional wheel brakes will be completely replaced by electrical brakes with minimal energy wasted through friction.
To ensure reliable operation of the powertrain and braking system, driver inputs are fed into
a quadruple-redundant electronic control system.

Ecologically sound solution for commuters
The Volvo ReCharge Concept is best suited to car drivers who cover moderate distances every day. For example, a commuter who has less than 60 miles to drive between home and workplace can cover the entire round trip on electric power alone, making the car a Zero Emission Vehicle (ZEV) for most everyday driving.
Even drivers who cover more than the battery-only range will benefit from the ReCharge Concept. For a 100 mile drive with full batteries, the first 60 miles will be with no fuel consumption and the remaining 40 miles will be at 60 mpg. No more than 0.67 gallons of fuel is needed to go 100 miles, which is equivalent to 150 mpg.
"The only requirement is that the car owner has access to electrical outlets at convenient places,
such as at home or at the workplace. A full recharge takes 3 hours. However, even a one-hour quick charge should provide enough charge to drive about 30 miles," says Magnus Jonsson.

Keywords:
ReCharge Concept, Product News
Descriptions and facts in this press material relate to Volvo Car UK's car range. Described features might be optional. All information is correct at time of going to press and may be altered without prior notification.
To view the full copyright information click here
Related Images
Sep 06, 2007 ID: 12195 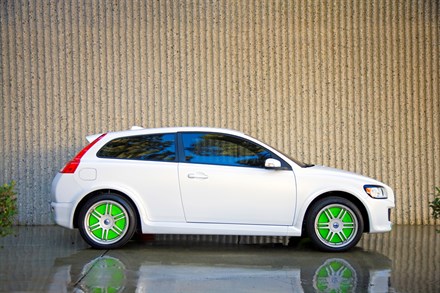