The all-new Volvo V40 and Swedish golf Star Peter Hansson are two of the debutants at the 47th Volvo World Match Play Championship. The prestigious tournament will be staged at Finca Cortesín, Andalucia, Spain, from 17th-20th May, 2012.

The Volvo World Match Play Championship will be broadcast in over 150 countries on all five continents. About 1,800 hours of world-class golf TV coverage will generate around US$ 14 million in media value alone. The 2012 Championship will once again attract the best golf players in the world and some 15,000 visitors are expected during the tournament.

24 of the highest-ranking golf players in the world will participate in the Volvo World Match Play Championship. Last year's winner Ian Poulter will defend his title against Swedish pro Peter Hanson, who recently finished third at the US Masters; Branden Grace, winner of the Volvo Golf Champions and Volvo China Open; as well as Justin Rose and home favourite Sergio García .

Stefan Jacoby, CEO & President of Volvo Car Corporation, said: "Thousands of visitors are expected during the tournament together with some 300 VIP guests. This is a perfect way for Volvo Car Corporation to strengthen our relationship with our customers, to welcome new clients and to make the Volvo brand even more visible. The connection between the world-class line-up of golfing stars we will see compete and Volvo's award-winning range of cars is compelling. This is a unique way to showcase the brand and the products. And on course, to further add to the excitement this year, we have a very special hole-in-one prize on the 10th hole, where the players will have the chance to win the all-new Volvo V40." 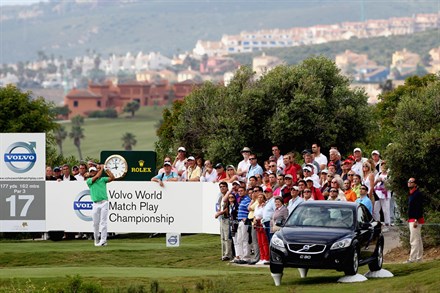