The largest automotive organisation in world, German ADAC, has carried out an extensive comparison test of different automatic speed and distance control systems.
Volvo XC60 clearly won the test in which six different models were compared.

"ADAC has carried out a total judgment which included the Adaptive Cruise Control (ACC) as well as the Distance Alert and City Safety. As far as I know this is the first time a test evaluates the total effect of those safety enhancing functions," says Jonas Ekmark, Active Safety Hub Leader at Volvo Cars.

In the report of the ADAC test is said: "the Volvo system scores above all due to  the fact that it consistently puts its emphasis on accident avoidance. The driver is informed about a danger by a red flashing warning lamp, which is projected onto the windscreen. At low speeds, below 30 km/h, the additional, integrated laser technology called City Safety also recognises stationary vehicles and in a potential accident situation, brakes in time to stop the car."

The exceptional position of City Safety is underlined by the fact that this system is not only unique in the whole world, but it is also in mass production in the current Volvo XC60.

ADAC underlines another characteristic of the Volvo active speed and distance control system: "even with the ACC switched off, the driver is efficiently but not disturbingly warned, if below the safety distance.

ACC in all-new S60 - plus a world first function
The active speed and distance monitoring system is currently available for the Volvo XC60, Volvo XC70, Volvo V70 and Volvo S80. It will also be offered in the all-new Volvo S60, which will celebrate its world premiere at the beginning of March at the Geneva Motor Show.

On top of the ACC system, the all-new S60 has a world-first function; Pedestrian Detection with Full Auto Brake - a system that brakes automatically for pedestrians and can avoid a collision at speeds up to 35 kph. The all-new S60 includes City Safety, as the XC60, as a standard feature.

The other cars in the ADAC comparison test were Audi A4, Volkswagen Passat CC, Honda Accord, Lexus IS and Ford Mondeo. 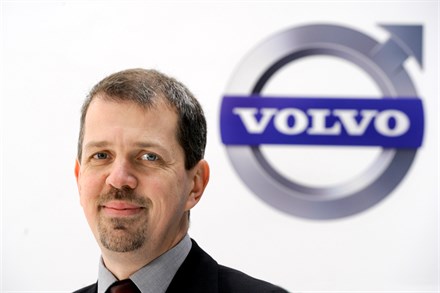