Sailing into the Unknown - Volvo Ocean Race leg 3 to start

The Volvo Ocean Race fleet is set to sail into the unknown on Saturday when leg three starts from Cochin, India. The finish line is off Singapore, and the fleet is expected to take just over a week to get there.

Following the first ever stopover for the race in Asia, the eight teams are preparing to tackle what is expected to be a light, fluky, upwind leg, with plenty of potential pitfalls along the way.

Leg three is the shortest so far in the race - at 1,950 nautical miles - and takes the fleet around the southern tip of India and west into the Straits of Malacca, which ranks amongst the busiest shipping channels in the world. As much of the route straddles the equator, light, changeable conditions are expected for much of the leg.

"It's going to be a tough leg, with more upwind than in previous legs, and a lot of hazards along the way, so I think it will be quite exciting," said Torben Grael, the skipper of the race leading Ericsson 4. "There will be a lot of challenges and it could be decided by luck or a cloud."

"I have a feeling that we really don't have any idea as to what might happen," agreed Ian Walker, the skipper of Green Dragon. "I wouldn't make any predictions on this leg; we just have to get on it."

In addition to the commercial shipping hazard, large fishing fleets made up of small, local boats could prove difficult to avoid, while piracy remains a threat on this leg as well. Conditions on board will be extremely uncomfortable, as the equatorial heat and humidity takes its toll on the crews.

For all that, at the skippers' press conference on Friday, many of the sailors spoke of how much they have enjoyed their brief time in Cochin, a place that few professional sailors expected to encounter in their careers.

"It's clear that India has taken in this race with open arms and the race has taken India in with open arms," enthused PUMA skipper Ken Read. "It's been a wonderful experience here. I think we were all looking forward to it on the one hand but felt slight trepidation on the other hand because we're venturing into the unknown. But so far, it's proved to all involved that this could be one of the best decisions ever made in boat racing to bring the race to this part of the world."

The race start for leg three is scheduled for 1530 local time in Cochin (1000 GMT) and will follow a Parade of Sail as well as a ‘Ceremonial Start' (at 1400 local) which will take place in the channel alongside the Race Village. Hundreds of thousands of spectators are expected to gather along the river banks and in the Race Village itself to send the fleet off to Singapore.

There will be live audio commentary of the start on www.volvooceanrace.org, starting at 1515, local time (0945 GMT) as well as a start blog featuring written commentary and photos from the build-up to the start.

Images
High resolution images can be downloaded from: http://images.volvooceanrace.org

About the Volvo Ocean Race 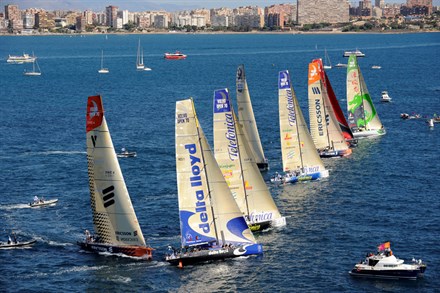